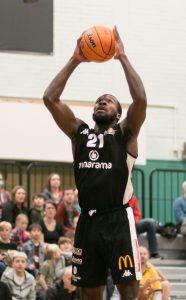 Saturday saw Vanarama-sponsored Hemel Storm face BA London Lions in what was a tough, interesting battle as both teams were near each other in the league table. Storm ran out 89-106 winners with good team basketball and discipline shown.

The standout performances came from the Americans Taylor Johnson and Greg Poleon; Greg registering a double double with 38 points and 13 rebounds and Taylor scoring 37 points 7 rebounds and 8 assists.

BA London Lions started the first quarter fast with swift movement in transition and stamina being the younger side, scoring two quick baskets to get the scoreboard ticking with a 5-0 lead. But they got into foul trouble early with their eagerness to steal the ball which allowed Storm to score their free throws. It was not until 5:28 left in the quarter that Storm scored their first field goal of the game with a Greg Poleon jump shot. This started a series of consecutive points with an and-one dunk from Poleon forcing Coach James Vear into the game’s first time out with the scores at 14-16. Hemel extended the lead to 10 points before Barking Abbey hit back with a three point buzzer beater from their top scorer Elijah Maynard to end the quarter with the scoreboard showing 24-27.

Storm used the quarter break well as they regrouped and started the second quarter with determination and fight. This ultimately had an impact especially defensively as they limited Barking Abbey to only 16 points. Offensively, Storm moved the ball fast and found openings underneath the basket in between the tiring defence. Taylor Johnson saw a lot of joy receiving the passes and driving to the basket adding points to the board from a Storm perspective. A layup from Sam Newman looked to have ended the half, however, Barking Abbey scored an unbelievable half court buzzer beater off the backboard from Peter Asante taking both teams into their locker rooms for half time, with Storm leading 43-57. 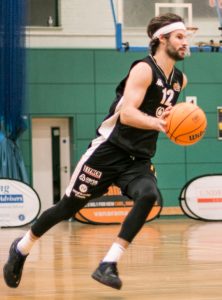 The break gave opportunity for Barking Abbey to restore their energy as they started the third quarter pressing Storm up the court, forcing Storm to turn over the ball a few times. But once Storm got past half court, it was a matter of finding a good, open shot to take which they did very well. The defence of both teams was intense and strong as it resulted in contested shots or turnovers, which both teams used to their advantage. Storm would usually look to find Greg or Taylor in and around the three point line who could comfortably shoot under pressure and drive to the basket. There was conbributions from other team members too. Sam Newman scored 11 points, and although Levi Noel did not score, he got 10 assists which often goes unnoticed especially with the numbers that players score in a game. This ended the third quarter with the scores at 61-78.

The fourth quarter was a matter of playing smart at both ends of the court as the teams had different purposes. BA London Lions had to reduce the gap to try to win the game where as Storm had to match their opponents and potentially increase the points gap. Hemel started well but did turn the ball over a few times resulting in some unneeded baskets conceded. But once Taylor Johnson forced an 18 point gap with 5:27 left, the game looked over. Storm made sure that the win was confirmed by keeping the points gap to double digits and controlling the game at both ends of the court. Barking Abbey scored 2 of their 3 free throws as the buzzer sounded for the end of the game. Storm ran away 89-106 winners deservedly after an impressive display shown in front of their travelling crowd.

Storm now go on to face Essex Rebels away on Saturday 4th December before returning back to the StormDome on Sunday 5th December in the National Cup Quarter Finals against BA London Lions. Tip off on Sunday is 5pm. Tickets to the game are available online at www.stormbasketball.net or can be purchased at the door on the night.