THE COMMUNITY CLUB WITH A NATIONAL NAME 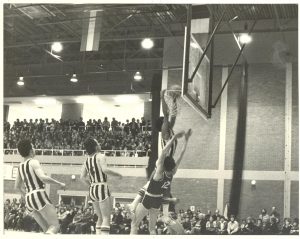 he excitement and spectacle of top class basketball returned to Hemel Hempstead in 2010 when a group of enthusiasts re-formed a National League side in the town and made Sportspace its home.

And the Club – a non-profit organisation – now provides family oriented, sporting entertainment to packed crowds from the local community as well as organising opportunities for youngsters to play and be coached through its partnership with Russell Hoops.  The Club is managed and run entirely by dedicated and hard-working volunteers.

Hemel Storm was born after getting agreement from Basketball England (BE) to move a failing Division Two franchise from Edmunton to Hemel Hempstead. And success was quickly achieved with the Club winning two National Patrons Cups and promotion in 2012 to National League Division One which is BE’s top level  of senior men’s competition. 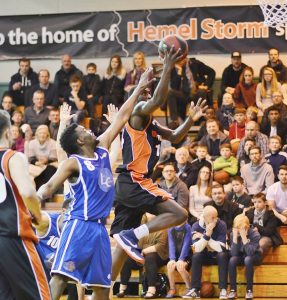 The move rekindled memories of basketball in the seventies, eighties and early nineties when Hemel was one of the leading sides in the country sponsored by Ovaltine, and brought the show to a new generation. In those days the Channel 4 cameras came to Hemel on a number of occasions and showed several games live from the sports centre.

Since moving up to Division One and despite having less resources than most of the opposition they have faced, Storm has been competitive every season and has been supported by the best fans in the country. Visiting players, coaches and officials who come to the ‘StormDome’ enjoy their time there and often comment on the fantastic atmosphere that is created and the enthusiastic support the Storm players receive.

Storm has established itself as a Division One Club, finishing in the top four, and qualifying for the end of season Championship Playoffs on numerous occasions, along with being crowned the 2018 National Cup Winners.

The unique mixture of sporting entertainment and community involvement has increasingly attracted partnerships with sponsors ranging from individual patrons to some major national brands including Vanarama, McDonalds, and Arriva. 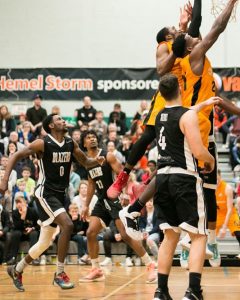 Immediately after the 2016/17 campaign ended a new five person Management Team was set-up under the Chairmanship of long-time Hemel basketball fan and marketing wizard Tony Humphrey that has streamlined the way the Club operates and secured new and former commercial partners without whom Storm couldn’t survive at the top level.

The Club enters this season with excitement and anticipation following the creation of a squad featuring some fan favourites as well as new faces that bring talent and experience to the Club.

Storm’s goals are to bring silverware to the town, to continue offering compelling and thrilling sporting entertainment, and to engage fully with our local community.