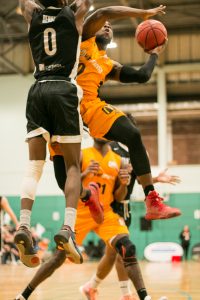 Hemel welcomed new signing Jordan Jackson who has joined on loan from BBL side London Lions for his home debut.  Jordan is 6’9” tall and fills that game vacated by Lee Hodges.

This was a big game as Derby are one of the three teams to have beaten Storm this season.

The game at Derby was perhaps the worst performance of the season. After winning the first quarter Storm collapsed and were hammered 28-11 in the last quarter to lose the game by 26 points, 97-71.

Derby have a strong line up, big American Malcolm Smith is a former NBL MVP and a very tough inside player. American guard Tre Wilford has been in spectacular recent form and a close game was expected – but Storm had other ideas. 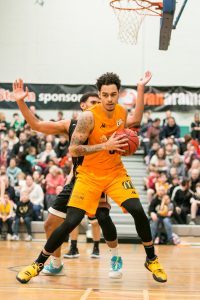 Derby had the better start and opened up a 10-6 lead but three consecutive scores at the end of the period sent Storm into the first break 23-17 ahead. As in recent weeks, Storm were getting scoring across the team and Derby could not contain the spread of offence as Storm hit a massive 35 points in the second quarter to end the half 59-34 up. The third quarter proved a much closer affair as Storm shaded it 26-24. Derby won the last stanza 30-27 but the game was long over with a superb 112-88 win.

This was a great team effort but some notable stats included Williams hitting 53% from downtown (8/15) taking 10 rebounds and giving 3 assists plus scoring a game high 37 points. Sam Newman also shot 50% and gave 7 assists hitting 17 points while Bode Adeluola had 6 boards, 9 assists and 15 points. Jack Burnell made 12 points in 14 minutes of court time and Jordan Jackson shot a superb 75%, took 7 rebounds and gave 4 assists adding 12 points. Finally Greg Poleon had a double double of 15 points and a huge 19 rebounds.

Storm shot a higher percentage than Derby and won the battle of the boards. A brilliant all round team performance that will send a message to the league – this team means business.

Storm are not in action this weekend. Their next home game is on Saturday 8th February when local rivals, Essex & Herts Leopards visit Hemel Leisure Centre, tip off 7 pm. Tickets available at www.stormbasketball.net