Great win on the road for Storm II 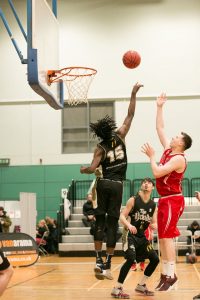 Hemel Storm II, sponsored by Certa Group Ltd, got off to a fantastic start in 2020 with an emphatic win away to Nottingham University.

Storm were prepared for a tough outing having lost by twenty points in the reverse fixture earlier in the season.  And it was Nottingham who took early control of the game to lead by 5 at 19-14 after the first quarter.  There then followed 20 minutes of the best basketball that Storm had played all season.  Tenacious defence held their opponents to just 12 points whilst multiple Hemel scorers poured in 29 in the second period.

Things looked to be taking a turn for the worse in the third quarter as influential starters Nick Allin, Dominic Charles and Daryl Craine returned to the bench having picked up early fouls.  But the Hemel subs continued the onslaught scoring an incredible 41 points in the quarter to lead by 38.

Nottingham clawed back a few points in the last quarter but the game was well and truly over.

Team Captain, Daryl Craine said: “We felt we had let ourselves down with a really poor performance in our last game before Christmas and needed to get back on track quickly.  We put a lot of emphasis on our defensive intensity which turned into easy points for us.  There were fantastic contributions from everyone in the team.  We now have to maintain that standard for the rest of the season.”

Storm II are at home this Sunday when they take on Bury St. Edmunds Bulldogs at John F Kennedy School, Hemel. Tip off is 5pm.