Impressive offensive performance not enough to get the win for Storm 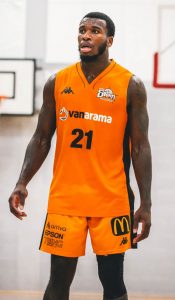 The two teams came out with both offences firing as Cavaliers led 33-27 at the first break. Greg Poleon had his trademark jump shot flowing hitting 11 first quarter points.

The second quarter continued in a high scoring theme as Cavaliers hit 5 shots from downtown and the impressive Sylla went to work inside. Storm were now getting contributions across the team with the returning Bode Adeluola making penetrating drives to the hoop and drawing fouls from the defenders. Champion repeated his previous game heroics with a score from the half way area as the buzzer sounded for the half.  Cavaliers led 62-54 at the break and the points conceded giving Coach Spinks a challenge to address in the locker room.

A better defensive effort held Cavaliers to 22 in quarter 3 and Storm hit 24 with Mike Williams scoring from long range to suggest a comeback was on the cards but foul trouble hit the team in the last stanza as Leon Noel and Greg Poleon fouled out. Cavaliers had a 9 point unanswered run and took the victory  107-97.

So, a very impressive offensive performance from Storm with points flowing but challenges remain defensively.

Greg Poleon led the team with 29 points and 16 rebounds in an MVP performance. Bode Adeluola made 21 points and Mike Williams 20 points with 9 rebounds.

Seth Hawley led all scorers with 31 for Cavaliers and Sylla had 23.