Basketball returned to Hemel on Saturday night and what a return it made! 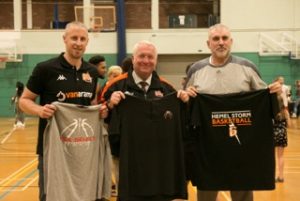 The opponents were a touring group of US players who compete in an amazing 26 games over 14 days with a travel schedule to match. They faced a new look Vanarama sponsored Hemel Storm, with returning captain Bode Adeloula joined by Nick Allin, Jack Burnell and Will Ashby from last year’s squad, new signings Jake Murphy, Ollie Dykes and Sam Newman plus a welcome return for big Lee Hodges, all under the management of new coach, Storm legend Dru Spinks.

The game started as might be expected, with both teams testing each other out and trading baskets, until Will Ashby found the hot hand and hit 4 straight three pointers to give Storm a lead of 31-15 after 10 minutes. The second quarter continued in the same vein as Storm made use of their height advantage with Hodges and Murphy scoring inside, leading by 24 points after 15 minutes. Job done? You might think so but the last five minutes of the half showed what was to come as USA scored 18 points to all but double their score and trail by 17, 57-40 at half time.

The third quarter showed what may be the best exhibition of shooting that will be seen anywhere this season, as the Americans drained three pointer after three pointer, hardly missing and cutting into the Storm lead. Storm had moved from a man to man defence to a zone defence to protect their players in foul trouble but USA Select just shot over it at will, scoring 32 points in ten minutes and cutting the lead to just 4 points, 76-72 at the end of the third stanza. 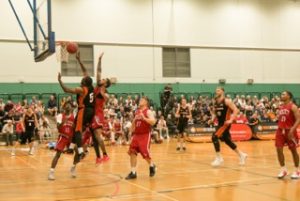 From a very comfortable win, we now had a game on our hands and there was to be no let up. Storm switched back to a man defence and started to get steals but USA kept draining their shots and putting Storm under huge pressure. USA finally took the lead at 91-90 with two minutes to go and having led by as many as 27, Storm were looking at an opening night defeat. Someone would have to stand up and take charge – time for Captain Bode. With a series of thrilling drives to the basket, all under huge defensive pressure, plus drawing fouls, Storm responded to the challenge. The whole team upped the defensive intensity and forced misses and turnovers from the opposition and saw the game out winning 101-91.

Coach Spinks was pleased with what he saw: “I’m glad the game turned out like that rather than a 30 point win as I have learnt a lot more about my team than I would with an easy victory. We didn’t need one man to take the challenge, we needed the team, and that’s what we got. Very pleasing and lots to build on.”

Storm hope to announce the signing of two new American imports in the coming days.

Storm start their league season on Saturday 28th September away to Liverpool. They return to the StormDome on Saturday 5th October, 7pm tip off against Nottingham Hoods. Tickets are available at www.stormbasketball.net