Storm fall against Worthing Thunder but progress in the National Cup Saturday saw Vanarama-sponsored Hemel Storm face the in-form side of Worthing Thunder, who came into this game with a 6-1 record. Storm were in for a battle and knew that they had to give their all on both ends of the court. Storm eventually came up short, losing 85-95.

The first quarter started in Thunder’s favour with new signing Lucien Christofis sinking two early three point shots to put a lead on the board at 2-6. Storm immediately replied and with a three point shot from American Greg Poleon turned the score to 9-8. Worthing were quick to retake that lead but with 3:18 left to play, a Tayo Oyefusi lay up forced Worthing into an early time out with the scores at 13-16. It remained fairly equal in terms of possession of the ball with both sides going into the quarter break at 22-24.

Storm started the second quarter well, it was a very close quarter as both teams struggled to find good shots. That was a credit to both teams as the defence hustled and rebounded the ball well. Storm were forced into a timeout with 3:29 left to play due to a defensive collapse which Worthing took advantage of. Worthing especially looked for the threat of Howard Crawford who finished the game on an impressive 26 points and found spaces in between the Storm defence. Both teams went into their locker rooms at half time with the scores showing 37-41.

Storm started the quarter with an early travel call to add to the frustrations. When Taylor Johnson reduced the lead to within 1, it looked like Storm were coming back. That was until Worthing started to find their shooting touch again. Tom Ward struck from the three point line to make the score 50-57, a score which was deserved due to poor defence from Storm and good offence from Thunder. Storm did pull it back towards the end of the quarter which meant that it was all to play for in the last quarter with the scores showing 61-63. 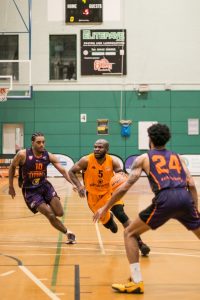 Storm tied the scores up early, after former Storm player Hafeez Abdul scored one of his two free throws, with sharp shooter Jack Burnell finding the basket from way beyond the three point arc. Worthing regrouped and then came back with some shots of their own, and got Storm into foul trouble quite early on, making it even harder to defend for Storm. A series of missed shots made the difference as the Thunder went on a good run to increase the points gap even more. With poor defence, Worthing were able to capitalise and turn the gap into double digits which meant that the scores ended 84-95.

Storm needed to regroup and move on to Sunday’s National Cup fixture against Northants Titans.

Quarter One of Sunday’s game showed a major improvement at both ends of the court with Storm going up against two former players in Leon Henry and Leome Francis. Storm passed the ball well and took shots from good distances which resulted in easy baskets and a very good start. Defence was a lot better than the day before with Storm limiting the Titans to low percentage shots and only 14 points. Storm doubled the amount of Titans’ points and finished the quarter on 28 which was deserved due to a good all-round display.

The second quarter did not change the way Storm played. High intensity play and quick ball movement resulted in many layups and shots under the basket which Storm executed very well. The Titans also had some good shots of their own, with Leome Francis muscling his way to the rim getting 12 points and Jason Tucker from beyond the arc who scored a very impressive 25. But Storm’s defence stayed strong throughout and they went into the half with a 55-32 lead. One which was deserved but Storm needed to keep in order to progress in the cup. Storm once again continued to impress as there was no third quarter curse for them this time. As Storm could only field one American, due to cup rules, they played to their strength with Taylor Johnson seeing a lot of joy from inside the three point line, ending up on a good 28 points. This was to be Storm’s highest scoring quarter of the game with Storm getting 33 points and Northants only scoring 17. This would take both teams into the final quarter with the scores at 88-49.

The game looked over from the end of the third quarter. But if there were any doubters on whether Storm would hold this lead, they silenced them by scoring 18 points to the Titans 20. Storm had put on a good display and as a result, handed game time to University of Hertfordshire Storm players Temitayo Fatusin and Toby Gastaldi-Davies who immediately showed their hunger with a three pointer for the pair of them and some great hustle to force some turnovers in Storm’s favour. Storm saw out the end of the game and finished with the scores at 106-69. A score which was deserved from Storm’s perspective with impressive defence and offence which made it a comfortable game for them.

Overall, the weekend showed many things from Storm. They improved dramatically on their positioning and communication to their defence and how they moved the ball around whilst on offence.

Storm are now through to the National Cup Quarter Finals facing either BA London Lions or Oaklands Wolves at home on Saturday 5th December, 7pm tip off.  Tickets to the game are available online at www.stormbasketball.net or can be purchased at the door on the night.