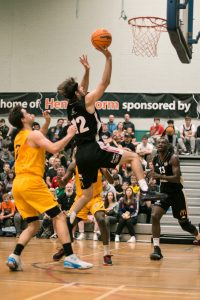 Vanarama-sponsored Hemel Storm took on the talented Team Newcastle University at Hemel Hempstead Leisure Centre on Saturday night in what turned out to be a game of the highest class. Storm were again without the injured American Greg Poleon and Bode Adeluola.

Blain opened the scoring for Newcastle with a lay up and a 3 pointer from Yabula gave the visitors a 5-0 lead. Threes from Johnson and Oyefusi put Storm on the scoreboard and the teams traded baskets. Newcastle were being led by impressive point guard Moya who formed a strong partnership with Blain. Newman and Johnson hit a combined 18 points as the first quarter finished 26-22 to Storm. Both teams were shooting well and defence was under real pressure.

Storm opened up a 7 point lead in the second period with Shaquille Lewis having an impact off the bench but threes from Newcastle pulled it back to a 1 point game and forced Storm Coach Spinks into a time out. Newcastle took the lead at 43-45 and extended that following a Storm turnover which caused Spinks second timeout in a three-minute spell. The game was incredibly end to end and no one seemed able to get a stop. The half finished with Storm up 58-56, a very high score with some incredible numbers behind it. 35 three point shots were taken and 20 of them made. Taylor Johnson had scored 18 points and Sam Newman 16. For Newcastle Gayle had hit 16, Federici 14 and Blain 13.

It really felt like whoever could get a defensive grip would win the game. A nip and tuck third quarter sprang to life with a superb dunk and block from Blain as the visitors opened up a 5 point lead. Newcastle had switched to a zone defence which blocked the Storm offence and they tailed 85-79 as the third quarter ended. 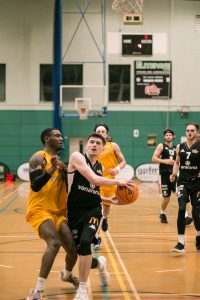 Newcastle took the ascendancy in the 4th quarter, but Storm refused to lie down. Coach Spinks called a timeout with the game tied and 5.06 mins left on the clock. The momentum changed as Storm finally took away the three point shot and challenged every lay up. Then led by the unstoppable Johnson they added to the points tally and finally put Newcastle away 117-104. When the going gets tough, the tough get going and, roared on by the home support, that’s exactly what happened in the last five minutes.

A great win by Storm over a very talented opposition, but both teams can be proud of the masterclass of shooting they put on for the packed crowd.

Storm start their National Cup campaign this weekend, they play on Sunday 24th October against Team Birmingham Elite at Hemel Hempstead Leisure Centre, Tip Off 5pm. Tickets are available online at www.stormbasketball.net or can be purchased at the door on the night.