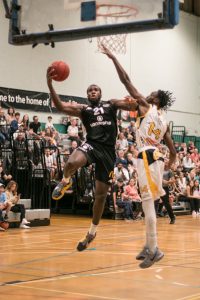 Despite leading at half time, Vanarama-sponsored Hemel Storm lost 74-82 against Thames Valley Cavaliers in the L Lynch Trophy in what was a low scoring affair.

It was Storm who were leading from the start in the first quarter, with quality from both sides of the court. The defence and offence led Storm to a game high 9 point lead with Thames Valley quick to respond with points of their own, limiting that lead to only 4 going into the second quarter at 22-18.

The second quarter was the lowest scoring quarter of the game with both teams playing some very good defence. Storm’s highlight play came in this quarter with last season’s NBL MVP Greg Poleon scoring a monstrous put-back slam dunk, bringing the crowd to its feet in disbelief. This play and performance by Poleon shows why Storm should be excited by his return. Defence was the key in this quarter with both sides limiting each other to a 17-15 score making Storm lead by 6 at the half with the scores at 39-33.

The third quarter showed the quality of Thames Valley demonstrating their amazing offence, which led them to a runners up position in the league last year. They registered 28 points and limited Storm to only 10 points. Forward Hakeem Sylla and Guard Jakobi Bonner were the standout performers for Thames Valley registering 43 points between them throughout the game. Storm needed to battle harder to win this game with the scores at 49-61 going into the last quarter. 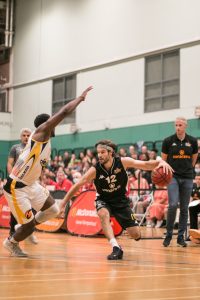 Storm came out in the fourth quarter with nothing to lose, demonstrating some brilliant offence bringing the 12 point lead to only 5. This was until former Storm American Guard AJ Roberts sank a three pointer. This shot was the turning point of the fourth quarter and although Storm won the last quarter 25-21 it was not enough for Storm to comeback and Thames Valley Cavaliers registered their first win with the final score at 74-82.

There were some promising moments from a Storm perspective but overall, it was the third quarter that won Thames Valley the game. There were some good performances especially from the two Americans Greg Poleon and Taylor Johnson showing why they were both battling for the MVP prize last year.

Storm are back at the Hemel Hempstead Leisure Centre playing Oaklands Wolves on Sunday 26th September in their second L Lynch Trophy game, 5pm tip off. Tickets are available online or can be purchased at the door on the night.