Double winning weekend on the road for Storm 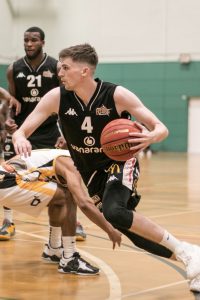 This weekend saw Vanarama-sponsored Hemel Storm play away twice. Oaklands Wolves on Saturday in the first NBL Division One league game and Reading Rockets on Sunday in the final game of the group stage of the L Lynch Trophy. Storm won both games on the road to show the league what they are really up against.

This weekend saw some standout performers, especially from American guard Taylor Johnson who scored 27 points on Saturday and 32 points on Sunday. He was the only American due to Greg Poleon’s injury, which saw him supporting the team from the bench for both games.

The first quarter against Oaklands Wolves started as a close encounter with the score going back and forth but once Storm got established, they never looked back and certified their dominance putting up 30 points. On the other hand, defence was something Coach Dru Spinks had talked about with the team through the quarter but they still managed to concede 17 points, most of them coming from former Storm player Jordan Jackson.

The quarter break saw Coach Dru talk over the defence in greater depth which worked brilliantly for Storm only conceding 7 points throughout the quarter. Although the focus was on stopping Oaklands from scoring, it did not mean that the shooting touch from Storm had gone. Many players chipped in to score in this quarter as well as debutants from the University of Hertfordshire, who are partners with Storm, Toby Gastaldi-Davies and Temitayo Fatusin. Storm went into the half with a healthy lead of 24-57.

Things were to get worse for the Oaklands Wolves as Storm were not willing to relax on a comfortable lead, they had worked hard for in the first half. Instead, Storm made their game highest points in a quarter with 34. As well as that, the defence was firm throughout and they limited Oaklands to 9 points. Storm especially saw gaps in the Oaklands defence with multiple fastbreaks from turnovers and free throws.

Storm could then relax and see out the game in the fourth quarter. Due to this Storm’s defence was not as strong as quarters two and three and led to them conceding 22 points. However, Storm saw the quarter out with a convincing win 55 - 117. 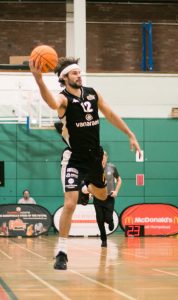 Sunday’s game was to be tougher. Hemel Storm faced a Reading Rockets side who also played Saturday against NBL Champions and Playoff winners Team Solent Kestrels. They only lost by five so this was to be a real test for Storm, especially without their talisman Greg Poleon.

The first quarter got the Reading Rockets off to a good start, who led by a game high of 5 points. All Storm had to do was play smart on both ends of the court which they did. Storm shot the ball reasonably well against Reading’s powerful defence and kept Reading to within arms reach with a fairly equal game going into the end of Quarter One.

Storm needed to respond and assert their dominance in this game and they did just that in the second quarter. Both ends of the court they showed class and brilliance with Storm limiting the Reading Rockets to only 11 points. For a Reading team who can shoot the ball well, the defence was on point. A highlight play saw Tayo Oyefusi hit an and-one three pointer to convert the games only four point play. Storm went into the half up with the scores at 32-41.

Both teams came out of the locker room after half time with a hunger and desire to qualify for the quarter finals of the L Lynch Trophy. Storm had to win by at least 8 points in order to do so, so were looking to further extend that lead. The third quarter was even with both teams displaying some good play on both ends of the court. Defence was key for both sides with the Rockets registering only 18 points and Storm getting 17.

An 8 point lead going into the fourth quarter meant that every point mattered. Storm were shooting the ball well and Reading were doing the same. Defence was exactly the same for both sides as well. Due to Storm getting to five team fouls in the quarter and a few turnovers, Reading saw a way back into the game and to snatch the quarter final spot off of Storm. Storm threw everything at it with numerous timeouts called to talk over plays on the offensive end of the court. Unfortunately for Storm, it was not enough to advance. But the final score saw Storm win back to back away games on the weekend winning this game 78-81.

Both games saw double figures for a lot of players, with Guard Taylor Johnson stealing the show for Storm, Sam Newman, Johnathan Lashley, Tayo Oyefusi and many more players who had great performances.

Storm’s next game will be a tough one on Saturday 9th October against the Thames Valley Cavaliers back at the Hemel Hempstead Leisure Centre, Tip Off 7pm. Tickets are available online at www.stormbasketball.net or can be purchased at the door on the night.