Storm go two wins from two at the weekend 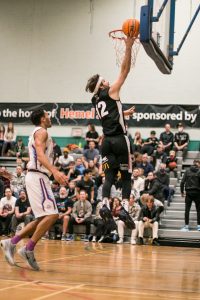 This weekend saw Vanarama-sponsored Hemel Storm deliver twice; the first win on Saturday against the Loughborough Riders in the National Basketball League and the second win on Sunday against Team Birmingham Elite in the National Cup.

There was some individual brilliance shown over the two days especially from American guard Taylor Johnson once again scoring 37 in the first game and 23 in the second. He has proved once again why Storm fans should be excited when he is on court.

Saturday against Loughborough started very well for Storm as they were focused from the start, leading to many Loughborough turnovers and eventually after a Taylor Johnson dunk, Loughborough had to call a timeout with the score at 2-15 to Storm with 7 minutes left on the game clock in the first quarter. Loughborough came out after the timeout with a purpose showing some excellent ball movement, closing the gap to single digits, with both sides going into the first quarter break at 26-29 to Storm.

Storm’s offence was especially brilliant going into the second quarter, with the players not willing to give up a lead that they had worked hard for in the first quarter. Storm hit multiple three pointers with Taylor Johnson and Sam Newman who had an exceptional performance scoring 17 points. Although players are noticed for how many points they get weekly, Levi Noel played an important role in helping these players to score registering 12 assists. Despite Storm’s efforts offensively, they were kept busy by Loughborough’s  talented offence with Tayo Oyefusi guarding the big Harrison Gamble and Victor Ndoukou. Storm went into half time with a 12 point lead and the scores at 47-59. 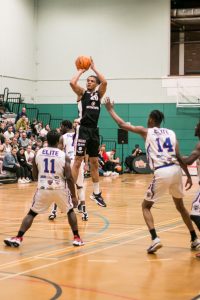 Both teams came out of the locker rooms with a different goal. For Storm it was to keep Loughborough at bay and increase the lead even more, and for Loughborough to push up the court and close the 12 point gap. Storm continued to be efficient from outside and inside the three point line getting a game high lead of 19 points. That was until the Riders came back with some shots of their own with the impressive Ndoukou who got 21 points and former Leicester Riders BBL player Harrison Gamble who got a double double with 16 points and 10 rebounds. Storm once again won the quarter 22-26 and went into the last quarter with the scores at 69-85.

With a 16 point lead, Storm had to protect the lead and play smart on both ends of the court. Due to this lead, Loughborough managed to penetrate the zonal defence with quick ball movement, leading to many open shots. Many turnovers were made by Storm but they did manage to put some points up of their own, with the terrific Taylor Johnson adding to the lead. Storm’s defence was still strong and did not let the Riders close the gap any further. Hemel Storm ended the game running out 92-101 winners. An encouraging, offensive performance which Storm had to carry on to Sunday’s National Cup game against Team Birmingham Elite.

Sunday’s game was to be a lower scoring affair but it did not start like that as Storm began with a 10-0 lead from which Birmingham needed a timeout to regroup and go again. The tactic for the opposition as the lower ranked team was to frustrate Storm when Storm were on the offensive and take advantage of their tired defence after a hard game the day before. Frustration for Storm all round from the fans to the players to the coaches as Birmingham went into the quarter break with a 1 point lead with the scores at 23-24.

Storm regrouped and started the quarter with a three pointer from Shaq Lewis, who went on to score an impressive 20 points. They were better defensively but signs of fatigue made Storm give up more points than they would have wanted. Despite lapses of concentration, Storm showed class and efficiency on the offensive end of the court scoring 21. Storm went into the half with the scores at 44-40, a lot closer than Storm would have liked. 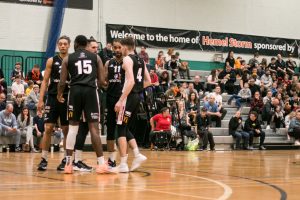 The players came out of the locker room after what must have been a strong message received from coach Dru Spinks. The players delivered and showed brilliant signs of basketball at both ends of the court. Many players shared game time as Storm had got into foul trouble with Taylor Johnson and Johnathan Lashley both getting 4 fouls heading into the final quarter. They both came off and were replaced by Jack Burnell and Shaq Lewis. Greg Poleon, who returned from injury to play against Loughborough, was rested due to the competition’s rule which only allows one American player to be fielded in the early rounds of the Cup against lower division teams. Storm won the third quarter 30-12 and went into the final quarter with the score at 74-52.

Storm had looked relaxed going into the last quarter and the players had slightly switched off due to fatigue and knowing they were going to get the victory. This led to what we saw at the end of the first quarter with numerous turnovers that Birmingham took advantage of and needless fouls being committed from Storm. Johnathan Lashley had been fouled out after a push, trying to get the rebound to put it back into the basket. University players Toby Gastaldi-Davies and Temitayo Fatusin saw game time in the final minutes. Storm struggled to find points and gave up many after frustration got the better of them. It was a low scoring last quarter with Birmingham Elite winning it 13-21. But overall, it was not enough and Storm won the game 87-73.

It was an action-packed couple of days with many promising plays shown in different competitions. But the main talking point was the individual performance from Taylor Johnson, as much as it is a team effort. After receiving Rebound’s Player of the Week for two weeks in a row, his performance against Loughborough, who had done their homework on him, could give him a third Player of the Week. But overall, the team worked well for two tiring games and came out victorious.

Storm are in league action this Saturday when we welcome Derby Trailblazers to the StormDome. The game tips at 7pm on Saturday 30th October at Hemel Hempstead Leisure Centre. Tickets are available online at www.stormbasketball.net or can be purchased at the door on the night.