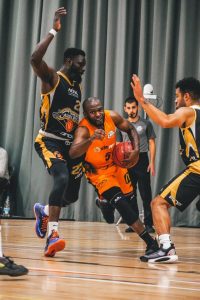 Lewis Champion's 3 pointer with 1 second on the clock condemned Vanarama-sponsored Hemel Storm to defeat in the final group game of the L Lynch Trophy.

It was last seasons 4th place vs 2nd place as Storm took on Thames Valley Cavaliers on Saturday. With both teams unbeaten and already qualified for the quarter finals, the prize for the winners was home advantage in the quarter finals and a tie against Worthing Thunder. The losers would face runaway league winners Solent Kestrels in Southampton.

Cavaliers were without their high scoring American guard Taylor Johnson, but centre Hakem Sylla took up the slack with a superb 26 point, 11 rebound double double. Storm could not handle the relentless rebounding from Cavs and gave up many offensive rebounds and put back scores. In an attempt to stem the flow, Greg Poleon picked up 3 quick fouls which limited his game time and points and rebound production, a huge blow to Storm. 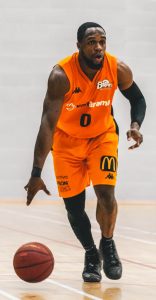 This left fellow American Mike Williams to lead the team and he played the whole 40 minutes hitting a game high  28 points, 5 boards and 3 assists in an ultimately losing cause.

Cavs started with a couple of three pointers but Storm responded and an even first quarter ended with Cavs leading 18-16.  Williams hit 5 straight free throws in the second quarter as Storm headed into the break with a small lead at 43-39.

Storm took control in the third period with Poleon back in the game and extended their lead to 65-58  This was looking like it was Storms to lose and they led by double digits midway through the period, but Champion had other ideas, hitting 8 straight points to give Cavs a lead of  80-78 with 3 minutes remaining. Baskets were traded but Storm were still ahead with two minutes left to play. Storm however could not close the game out. They fell behind but Levi Noel tied the game up with 25 seconds on the clock before the killer 3 won the game for Cavs.

Greg Poleon had 16 points and Bode Adeluola 14 with 5 assists and 5 rebounds.

The league is due to start this weekend, however, all clubs are awaiting a decision regarding Government funding before this can commence.