Vanarama-sponsored Hemel Storm took on the strong and organised Derby Trailblazers at the Hemel Hempstead Leisure Centre on Saturday night in what was to be a very tough game, with Derby beating in form Nottingham Hoods two days before.

Storm were the league’s top scorers going into this game but they started very poor in terms of shooting, failing to get a point on the scoreboard for 3 minutes and 38 seconds. Derby capitalised by taking an early lead of 0-6 before Johnathan Lashley started the scoring for Storm. The Trailblazers were in control from start to finish in the quarter with experience and class shown from their intense defence to their brilliant offence. Storm could simply not handle their main men of Malcolm Smith, who got 30 points, and Ryan Bruggemann, with 23 points. By the end of the quarter, the scores showed Derby comfortably leading 12-23.

Storm had to be resilient to get back into the game in the second quarter but many missed and contested shots prevented Storm from doing so. After Jonas Dieterich’s three pointer gave Derby a 16 point lead, head coach Dru Spinks was forced into calling a timeout to re talk tactics. Storm were a lot better defensively and started to try and close the gap offensively. It was always going to be tough against a well-coached Derby side whose players all knowing what their individual roles were on the court. Both teams went into the locker rooms with the scores at 30-43. A score that Storm desperately needed to turn around in the second half. 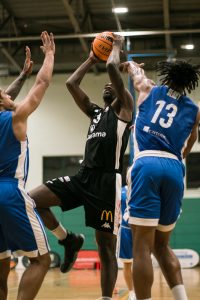 he Storm players came out with nothing to lose, closing the gap at the start of the third quarter and limiting Derby to a small number of points; and with a lay up scored by in form Taylor Johnson to reduce the gap to a minimum of 9, Derby needed to calm down and play to what they are capable with. They did just that, extending the gap to a maximum of 17 points and with Storm trying their best to close the points gap again, frustration stopped them from performing to their peak with Derby’s resilient defence preventing them from doing so. The scores at the end of the quarter read 51-66, a lead that Derby could relax on or even extend further.

Instead of relaxing until the end of the game, Derby came out of the quarter game with a purpose to punish Storm in front of their home supporters. Once Derby got going again, Storm knew that they were not going to win this game. It was by how much was the main question. Derby showed why they will be up amongst the top teams in the league by turning a 15 point lead at the start of the quarter to a game high of 29 points. Storm were playing for pride at this point. It was a frustrating game for Storm but with an and-one play from Taylor Johnson, the game ended with Derby Trailblazers running out comfortable winners at 73-94.

It was an incredibly frustrating game for Storm as they could not get going at all on a highly anticipated game between two top teams in the league. Storm were just no match for the talented Derby Trailblazers.

Storm are next away to Reading Rockets on Saturday 6th November and then are back at home against the Leicester Warriors the day after on Sunday 7th November. They currently sit third in the table with a 4-1 record, a good start to what will be a tough season with some tough teams. Tickets for Sunday’s game are available online at www.stormbasketball.net or can be purchased at the door on the night.