If you suffer with high blood pressure, avoid watching Hemel Storm - it won’t be good for your health! Vanarama-sponsored Hemel Storm squeaked a win 88-85 on Saturday night in their opening home league fixture against Nottingham Hoods in a pulsating, riveting game. 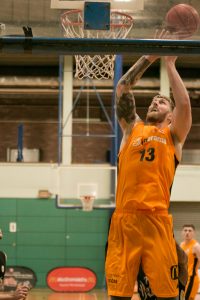 The two teams had identical records last season with Storm taking the higher league placing via the head to head record, Hoods winning by two in Hemel, but Storm winning by 16 in Nottingham. Both teams have added two Americans to their squads, though Hemel had to play without guard Mike Williams due to clearance from the international governing body not being received.

Nottingham started the brighter, breaking out into an early lead while Storm tried to find their rhythm, but there was never more than 4 points between the teams as half time approached. Storm then went on their biggest scoring run of the night, posting an unanswered 9 points, to lead by 10 at the interval.

When the second half started with a 5 nil Storm burst, it looked as if the game would be settled with a significant 15 point lead.  Storm had been led by centre Lee Hodges, who was taking a lot of physical punishment but stayed strong and was proving un-defendable in his inside play, and he dominated the rebounding stats. The teams traded baskets and Storm maintained a 9 point lead going into the last quarter.

And this is where the game really came alive. Nottingham were not going to go down without a fight and employed a full court press on the Storm ball handlers, forcing turnovers and getting easy scores. They started to penetrate the Storm zone at will, with Matt Ward Hibbert in particular proving un-guardable and scoring at will from a range of positions. Storm were then hit with a huge blow when man of the match Hodges picked up his fifth and disqualifying foul halfway through the quarter and would have to see the game through without him.

With 4 minutes to go it was a four point game. Will Ashby was fouled and made two free shots to stretch the lead to 6 but back came Nottingham and with 2 minutes to play it was a three point game. Storm were then handed a life line as Nottingham coach was called for a technical foul and Ward Hibbert also received a technical in his protest at the decision, which was his fifth foul and he left the game. Storm were awarded two free shots to stretch the lead to 5 but the usually unflappable Sam Newman missed both shots. Down came Nottingham to try and make it a one point game but a huge defensive play from Walid Mumuni forced a tough shot and then he grabbed a huge rebound, gave a great outlet pass that sent Bode Adeluola for a driving layup – surely game over? No, Storm then turned over possession twice in succession and Holston bought the lead back to just 3 with 35 seconds left. Nottingham would have the ball for a last shot. Storm were now really focussed on defence and every pass was contested, every ball fought for and they forced a final missed shot and played out the remaining seconds to grab a very hard fought win to the relief of a sold out StormDome.

Coach Spinks was philosophical in victory “What we need to understand is that we are still in pre season. I’ve only been with the team a month and we had two new players join this week. We are finding out a lot about each other and about us as a group. We want the players to show maximum commitment to each play, offensively and defensively, and at times we saw that tonight. There was a lot of positives and at times our offensive execution was excellent. But there were also lots of opportunities to learn from and that’s what we will do. So I’m pleased with the win but know there is work to be done”.

Storm are back in home league action on Saturday (12th), 7pm tip off against Westminster Warriors. Tickets are available at www.stormbasketball.net