Storm crash out of the National Cup after narrow defeat 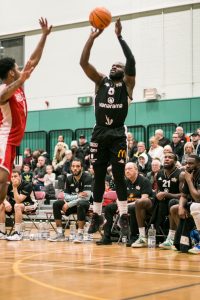 Sunday’s game saw Vanarama-sponsored Storm face BA London Lions, who Storm had beaten in a reverse fixture two weeks ago. Storm found it tough as the young Barking Abbey team were energetic throughout the game, leading most of the way. Despite a last quarter fight back to tie the game, it wasn’t to be as Taylor Johnson’s buzzer beater attempt just came up short which meant BA won the game 84-85.

BA London Lions controlled most of the game and were better in all areas on the court. They used their height advantage and saw joy from outside the three point line. As for Storm, it was a great fight back, but they will look back on this game thinking about the mistakes and turnovers they gave up which ultimately cost them the game.

Saturday’s game was much more positive as Storm triumphed on the road against Essex Rebels. After scoring 32 points in the first quarter, they did not look back and came out winners 84-103. Storm managed to score well from inside and outside the three point arc which decided the game between the two teams.

Storm used the threat of the American duo Greg Poleon and Taylor Johnson who combined with 35 points each to score an unbelievable 70 points. The game also saw Sam Newman suit up against his former team to score 10 points and Bode Adeluola also scored 9. Storm now sit third in the league table with a 7-3 record.

Storm travel to Solent Kestrels on Saturday but are back at the StormDome one final time before Christmas. Saturday 18th December, Storm vs Bradford Dragons, tip off on 7pm. Tickets to the game are available online at www.stormbasketball.net or can be purchased at the door on the night. 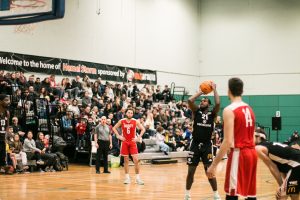