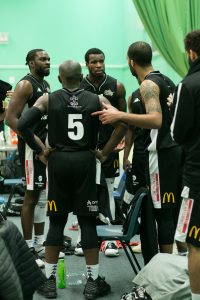 In a game of wildly contrasting fortunes, Vanarama-sponsored Hemel Storm improved their record to 5-2 as they squeaked past BA London Lions 84-81 at Herts Sports Village on Saturday.

Hemel started the game at a fast pace and raced to a 14-2 lead with Tayo Oyefusi hitting 8 points including two big three pointers. London captain Boardman-Raffet hit 8 of his own but Hemel spread the scoring across the team and ended the quarter with a 31-21 lead and looked very comfortable and on their way to a big victory. However, the second quarter was much more of a challenge as London started to find their shooting range. Greg Poleon continued his excellent form with 10 points in the quarter but the visitors hit three shots from distance and the deficit only increased by 1 point as the teams went into the half time break at 51-40.

Hemel produced their best defensive effort of the season in the third quarter, holding London to just 13 points and adding 21 of their own as they entered the last stanza with a 72-53 lead. But how the game changed. 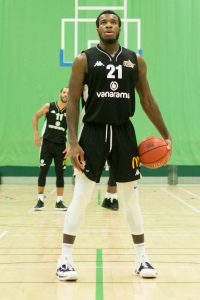 Coach Spinks elected to start the last quarter with his bench players, resting his starters but this opened the doors to the visitors. London hit an amazing 8 three pointers as the Hemel defence could not adapt to the drive and dish offensive challenge, and without the big guns the offensive production dried up.  With the lead down to 4 points and two minutes to play, all the starters returned but the closing minutes were nip and tuck with fouls, turnovers and missed shots. Two free shots by Bode Adeluola in the last minute made it a two shot game and despite a last final three by London, Hemel finally could breathe easily with the win.

A great effort from the London team who were without their leading scorer. Hemel gave a huge 21 turnovers which meant London had 18 more shots than the home side and 20 points scored from the extra possessions.

Greg Poleon again led the team with another double double of 25 points and 12 rebounds on 73% shooting and looks like a great fit for league MVP. Mike Williams had 16 points, Levi Noel 12, Bode Adeluola and Tayo Oyefusi 11.

Storm travelled to Chester on Sunday to take on Cheshire Phoenix in the BBL Trophy. This is Storm’s first game in this competition and a chance to test themselves against the professional outfit.

Storm made a good fist of it. A very competitive first quarter had Storm down by 3 at 19-16 but the game ran away from them in the second quarter as some starters rested and Phoenix pulled away winning the quarter 29-13. 19 down at the half, a heavy beating was possible, but the team stepped up in all aspects and won the third quarter 20-17. This effort continued in the last stanza as Storm also won that 14-12. The final score was 77-63 and Storm can be proud of themselves as they matched their higher league opponents for 75% of the game.

Greg Poleon had another double double with 23 points and 17 boards whilst Mike Williams hit 22 points and took 8 rebounds.