Lancashire in a spin as Storm dominate 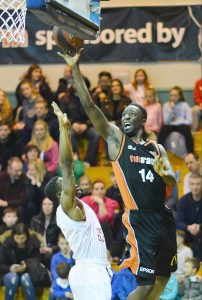 Hemel Storm got back to winning ways in front of a packed crowd at Sportspace on Saturday when they over-powered basement side Lancashire Spinners 109 – 75 in a National League Division One game.

The home team was able to throw a season’s high 31 assists while only committing an even more impressive four turnovers throughout the game. All but one player recorded an assist and the team also wracked-up 11 steals.

And after last week’s shooting woes against Kent Crusaders Hemel was able to find the basket at an impressive 55 per cent success rate and hit 17 of their 23 free-throws.

Before tip-off the Storm players had an opportunity to show the National Cup trophy to the fans and they received a standing ovation as it was paraded around the court after Steve Mark, Vanarama’s brand Director, and MP Sir Mike Penning re-presented the trophy for those supporters who were unable to go to the Cup Final.

Lancashire currently without a win in the League this season recently strengthened their roster with the signing of 6’ 8” forward Allie Fullah from BBL side Leeds Force although Storm restricted him to just 9 points.

The visitors led 5 – 2 in the opening minute on a Reiss Haggith triple but this was soon erased as Adeluola finished a fast break with a lay-up, and on the next possession AJ Roberts – Storm’s National Cup MVP - buried a three-pointer to spark a run that ended with Hemel ahead 26 – 17 by the end of the first quarter.

Hemel Coach Robert Youngblood substituted freely throughout the game including at one time in the second half replacing five for five players and by the end of the second period of a free-flowing affair his side had extended their lead to 54 – 39.

A spell in the middle of the third quarter saw the visitors held scoreless and Lee Greenan’s free-throws pushed the Hemel advantage to 30 points (79 – 49) until a late flurry of free-throws and a triple from Spinners’ Oliver Ladlow reduced the deficit to 84 – 60.

Hemel didn’t let up in the fourth period winning it 25 – 15. The stanza included a Chuck Duru shot that took the home team’s score over the hundred mark much to the crowd’s delight, and a debut basket from new signing Ladi Brown.

Coach Youngblood said: “These can be difficult games if you go into them with the wrong attitude. But I thought we gave a professional performance and got a solid win that keeps us in a top four League spot.

“We had consistent performances from everyone and the 27 points from Spinners’ turnovers was a credit to our defensive intensity. 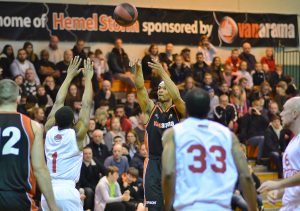 “We have some tough games ahead of us starting next week with Northumbria who are one place below us in the League and like us are challenging for a top-four finish to guarantee a home draw in the Play-offs.”

Storm are at home again this Saturday (10th) when they take on Northumbria in a Division One game at Sportspace, tip-off 7pm. Tickets are available from the 'tickets & shop' drop-down menu above