Storm slay the Dragons to move onto the Playoff Semi Finals

A Mike Williams masterclass saw Vanarama-sponsored Hemel Storm through to the NBL playoff semi finals with a 81-69 victory over a stubborn and resilient Bradford Dragons side on Saturday.

Bradford were the lowest ranked side in the quarter finals having beaten the higher seeded Essex Rebels in the previous round. It was clear they wanted to extend their season as they matched Hemel basket for basket in a tight first quarter.  They had done their homework as their defence on Greg Poleon, who is second in the league for scoring, was very effective and held Greg to his lowest scoring percentage of the season, just 46%. With the inside game neutralised Storm's guards had to pick up the slack, but with Sulcs proving effective on the offensive glass and Walsh rapier like in his three point shooting, Storm could not shake the Dragons off.

The first quarter was tied at 17 thanks to a last second three pointer from Williams taken from the half way line, which would have had the crowd in raptors if they had been allowed in. A great start to the second quarter saw Storm on a 14-2 run to lead 31-19, but Walsh drained 3 threes as Bradford responded with a 13-2 run of their own to regain the lead. Baskets were then traded and the teams went into the half tied 37 all.

Storm came out aggressively at the start of quarter 3 with a 15-6 run with Williams and Bode Adeluola leading the charge. Despite being in foul trouble and sending Bradford to the line for 8 free shots, Storm held the lead at 62-50 at the end of the third. 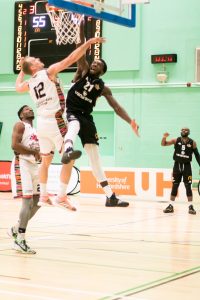 If Storm thought this was job done they were quickly corrected. Bradford kept their composure and would not let Storm pull away as they cut the lead to 7. Storm were having a nightmare from behind the three point line making only 4 from 18 attempts, a 22% success rate and some 16% below their season average. Conversely, they were aggressive on their interior defensive recording an incredible 9 blocked shots and denying Bradford scores in the paint.

With time running out Bradford had to foul to stop the clock but were not in the penalty so Storm retained possession. Mike Williams hit the last field goal for Storm and two Levi Noel free throws saw the game out. Hard work but job done. On to the semi finals next week against Worthing Thunder who recorded a superb victory over second seeds Thames Valley Cavaliers. Should be a great game!

Storm were led by Mike Williams with 30 points on 60% shooting, 5 rebounds and 5 assists. Bode Adeluola had 20 points, Greg Poleon 15 and 14 rebounds, Tayo Oyefusi took 11 boards and Levi Noel had 5 assists and 13 rebounds.

Dave Walsh had 24 for Bradford shooting 7 from 16 (44%) from three point range and Rihards Sulcs scored 19 and took 12 rebounds.

Storm will have home advantage in the semi finals as they welcome Worthing Thunder to the Hertfordshire Sports Village on Saturday 8th May, 5pm tip off, live on Hemel Storm TV YouTube channel.