Williams on point as Storm progress to the Playoff Final 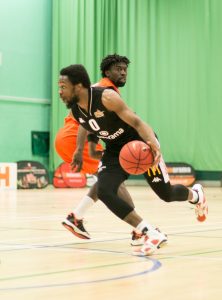 A virtuoso 45 point performance from American guard Mike Williams saw Vanarama-sponsored Hemel Storm through to the NBL Division One Playoff final as they saw off Worthing Thunder 95-82 at Herts Sports Village on Saturday.

Williams played at a major Division One College in the States and that pedigree showed in abundance on Saturday. Looking relaxed and at ease with life, every shot he took came in the flow of the offence. Nothing forced, nothing hurried. Worthing rotated players in a vain attempt to find someone who could guard him, but his smooth silky shooting action was unstoppable as he hit 67% of his shots. Those watching saw something truly special: a career defining performance from a special player.

Which is not to say the rest of the team’s efforts were not considerable. Crucial to the victory was denying Worthing second shots: Greg Poleon and Tayo Oyefusi both took double digit rebound numbers, Williams took 8 and Levi Noel 6 as they dominated the paint. Worthing beat second place Thames Valley Cavaliers last weekend with a superb display of shooting. Storm did a great job of taking the shots away from the opposition, closing out defensively superbly.

Both teams looked nervous at the start and barely a score was registered in the first two minutes. Tayo hit a 3 for Storm quickly replied to by Worthing American Zaire Taylor who stroked home from distance. The teams traded baskets until the eighth minute when Storm had an 8-2 run to lead 24-15 after the first quarter. 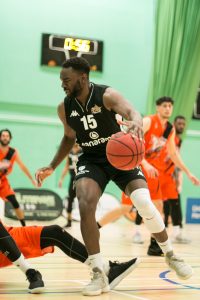 Poleon and Williams scores took Storm to a 15 point lead midway through the second quarter but led by the admirable Tom Ward who hit 8 straight points, Worthing made a 12 -6 run to keep the score close at the half at 43-36.

Playing consistently for 40 minutes has perhaps been a Storm issue this season, but with so much at stake Dru Spinks men never lost focus. A 10-3 run at the start of the third quarter opened up a 61-46 lead and the game was starting to look like a job done. But back came Worthing, as Max Richardson quietly went about accumulating points hitting 6 unanswered points to close out the third 66-57.

A place in the final was to come down to the last 10 minutes. A 6-0 run put Storm in control but Worthing are a good jump shooting team and Ward and Taylor drained distance shots as Crawford started to have an impact inside. But by now Williams was in the groove and supported by Bode Adeluola who made several superb penetrating drives to the bucket, Storm were not to be denied. With the clock running down Worthing had to foul to stop time. Up stepped Storm to drain 7 free throws to see out the game and reach their second NBL Playoff Final.

Williams had a mammoth 45 points for Storm, 8 rebounds and 4 assists. Coming off the back of a 30 point effort last week, he is staking a great claim for MVP of the Playoffs. Greg Poleon had his usual double double with 22 points and 15 rebounds. After being held to 46% shooting last week he was back to his best making 82% of his shots. Bode Adeluola hit 18 with 4 assists.

For Worthing Tom Ward played the whole 40 minutes and had 22 points, 8 rebounds and 5 assists in a memorable effort. Max Richardson had a 22 point, 11 rebound, double double. Howard Crawford made 18 and Zaire Taylor 12.

Storm now travel to Manchester on Saturday 15th May, where they will take on Team Solent Kestrels in the NBL Playoff Final, 6pm tip off, streamed on NBL Live. 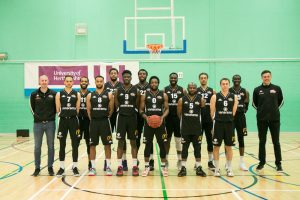