Poleon rewarded with NBL Player of the Year award

Storm’s very own Greg Poleon was awarded the NBL Wilson Player of the Year receiving a commemorative gold Wilson basketball at Saturday’s final in Manchester.

Poleon has played some remarkable basketball and has been a standout force at both ends of the court, combining shooting, rebounding and a dominant defensive presence. 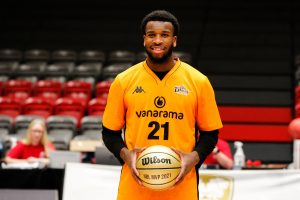 Storm’s head coach Dru Spinks said: “We are really pleased for Greg and his deserved recognition for his body of work across the whole 2020/21 season. Greg's approach and commitment to his craft, the club and his teammates alongside the discipline he shows in his preparation (often when no one is watching) in only his second year of his professional journey, is very impressive and he is a joy to be around. The consistency of his performances, week in week out, along with the efficiency of which he operates has really stood out. We are all excited for Greg as his game continues to grow and go from strength to strength."

Storm’s Director of Basketball Jon Burnell added: "Greg thoroughly deserves this recognition of being awarded the Player of the Year in NBL Division 1 this season. He has incredibly high standards, a wonderful team ethos and his consistency makes Greg a worthy recipient of this award. He has been a stand out player in our league since the get go. We couldn't be more proud of what he has achieved both for himself but vitally his contribution to the success of the team,  all of which have been achieved in the very challenging circumstances of the pandemic. Greg is a treasured member of our organisation and our community and we are all delighted for him."

The winner himself, reflecting on this massive achievement said: "I’m extremely honoured to receive such an award, but this award wouldn’t be possible without the constant help and guidance from both my teammates and coaches. Also I would like to thank all of the coaches within the NBL that voted for me."

Storm headed to Manchester on Saturday to take on Team Solent Kestrels in the NBL Playoff Final. However, it proved to be a game too far as Kestrels completed a league and playoff double with a comfortable 93-62 victory.

Solent applied the pressure in the first quarter, running up 9 quick points on their way to 28 points as Hemel mustered 16 in reply. Storm were up against an offensively loaded opposition who also played intense defence, focusing on Mike Williams and Greg Poleon and making them work very hard for every shot.

A much better second quarter for Storm saw the teams’ score 20 points each but a 9-0 run at the start of the third quarter laid down a marker and Solent completely dominated the stanza running up a 25-16 third period and held Hemel to just 10 points whilst scoring 20 in the fourth with the game finishing 93-62 to see Kestrels to victory.

MVP was Solent’s American guard Ian Smith who had an amazing game, scoring 37 points, taking 11 rebounds and giving 9 assists. He hit 57% of his shots including a superb 7 from 12 from 3 point range.

Hemel can reflect on a great season in difficult times, with a best ever 3rd place finish and a second playoff final.