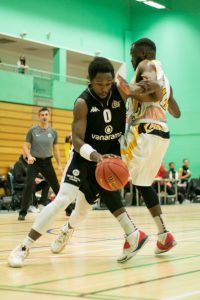 A thrilling clash between the second placed Thames Valley Cavaliers and third placed Vanarama-sponsored Hemel Storm took place at the Herts Sports Village on Saturday and saw the Cavaliers take victory after one period of overtime following an epic battle.

Storm opened the scoring with a Levi Noel three pointer but Cavaliers had a 9-0 scoring run to take the early lead. American guard Johnson proved hard to handle as Storm once again struggled defensively in the first quarter conceding 31 points to trail by 10 at the first break.

Storm started to play at both ends in the second quarter as Abdul came off the bench to score 9 points, hitting inside and from distance. Defensively they took 10 points from the Thames Valley first quarter score, holding them to 21 and reducing the deficit to 46-51 at the half time break.

The improvement continued in the third quarter with Thames Valley finding scoring a lot harder, with big man Sylla being the reliable option as he dominated on the boards and hit 6 points. Mike Williams was a constant threat for Storm as he drained shots from distance and made incisive cuts to the basket.  A 20-16 third period made it a one point game as the final stanza approached. 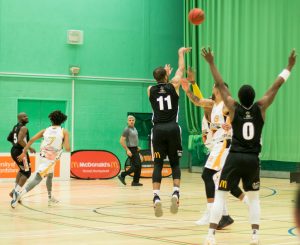 4 points from Abdul gave Storm the lead but a 10-2 run driven by 6 points from Champion put the Cavaliers back in charge. The game was end to end but two big 3 pointers from Williams pulled Storm within touching distance. Cavaliers led by 2 in the final minute as Johnson went to the line with the chance to make it a two shot game and end the contest. He made just one of the two free shots and with the buzzer about to sound, Levi Noel, who opened the scoring with a 3 pointer as the first score, ended the game with a long distance 3 that tied the game at 89 and sent the teams to overtime.

Cavaliers dominated the extra period with an 8-2 scoring run to record a 97-91 victory, but Storm had laid down a marker for the play offs. They were going to be contenders.

Mike Williams had a great game for Storm hitting 33 points and taking 6 rebounds. Poleon had a relatively quiet night but still recorded a double double with 16 points and 13 boards. Abdul came off the bench to hit 13 points and take 7 rebounds, Adeluola made 11 and gave 6 assists and Levi Noel had 9 points and 8 rebounds.

With the league coming to a close Hemel Storm confirmed a third place finish, a fantastic achievement in a difficult season. They will host Nottingham Hoods at the Hertfordshire Sports Village on Saturday in the first round play-off game. Tip off 5pm. Tune into Hemel Storm TV YouTube channel to follow the action.