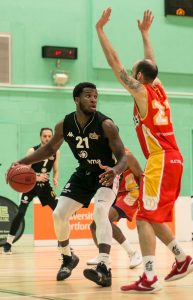 The NBL season is over and the playoffs started on Saturday. In this strange year, the playoffs have a strange shape with all teams competing. This meant the top two teams, Solent Kestrels and Thames Valley Cavaliers took the weekend off and third placed Vanarama-sponsored Hemel Storm took on bottom of the league Nottingham Hoods.

Apart from a reasonably competitive first quarter, the Hoods put up very little resistance to Hemel, conceding on almost every possession and failing to trouble the Hemel defence.

The excellent Greg Poleon put on a masterclass, scoring 18 points on 80% shooting, taking 17 rebounds (the whole Nottingham team only took 28), and as he was constantly double teamed, finding the open man for the easy score and recording a team high 7 assists. All done in just 24 minutes playing time.

Storm led by a huge 33 points at the end of the third quarter and this allowed Coach Spinks to leave his starters on the bench as none of them played much more than 20 minutes. The bench saw out the last quarter and ran out winners 101-68. 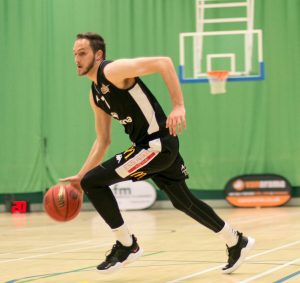 Jack Burnell led the team in minutes played and points scored as he hit a season high 22 points including 6 three pointers. Greg Poleon and Mike Williams both made 18. Hemel out rebounded Nottingham 57-28 and shot 50% to their opponents 39%. The only negative for Hemel was 18 turnovers which will be costly against better opposition.

Nottingham’s top scorer was the excellent Matt Ward-Hibbert who scored 20 points on 57% shooting.

Storm now move onto the quarter finals of the playoffs with another home tie as they welcome Bradford Dragons on Saturday 1st May, 5pm tip off, live on Hemel Storm TV YouTube channel.