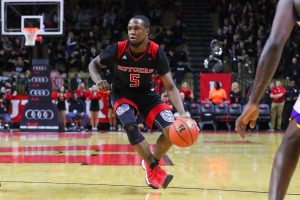 The Vanarama sponsored Hemel Storm is delighted to welcome American guard Mike Williams for the 2019-20 NBL season, subject to visa clearance. Alongside Greg Poleon, Storm is extremely proud to have a starting roster with two American talents for the first time since top class basketball returned to the StormDome in 2010.

The 22-year-old from Brooklyn, New York, who stands 6ft 2 tall, spent four years at Rutgers University and captained the side in his Senior year. Considered by many to be the heart and soul of the program, the dynamic New York City product is a great worker, shoots with range and is a very good defender. The Storm fans are going to love his toughness and competitive spirit, demonstrated by being one of the best rebounding guards in the B10 in his Senior year. Williams, himself, cannot wait to get started with his new team:

‘First and foremost, I have to give thanks to God for giving me the talent and all the support necessary in pursuing my dream of playing professional basketball.  I am also grateful and lucky to have loving and supportive family.  My entire family has supported me through this process and continue to be my biggest cheerleaders.  I am ecstatic to be able to put on the orange and black uniform to represent the Hemel Storm organization, compete with my new teammates, as well as being excited to play in front of the Storm faithful.  I would like to thank Chairman Tony Humphrey, Director of Basketball Jon Burnell and the entire Hemel Storm family for giving me this opportunity.

The African proverb, “It takes a village to raise a child”, is a phrase that applies to me in more ways than one.  With that being said, I have to acknowledge all of my coaches with sincere appreciation.  First, I thank my father, Michael Sr. and my big brother Marques who introduced me to the game at three years old.  In addition, thanks to my AAU Coach, Arjay Perovic, who helped to train me in organized basketball as a kid.  I would also thank my high school coach, Edwin Gonzalez, who trusted me with three years as his starting guard.  I have to say thank you to Coach Eddie Jordan and Coach Van Macon for recruiting me to play at Rutgers University and compete in the Big Ten Conference.  Their guidance prepared me to play on the big stage.  Finally, I thank Coach Steve Pikiell for his believing in me when he became the coach at Rutgers in my last two years.  He made me team captain, and allowed me to represent the team with the media during my last years there.  All of these men have been instrumental in moulding me into a professional athlete.

I’m so very thankful to my agent, Mr. Ryan Mulvaney for all of his counsel, guidance, advice, and all he has done for me to get me this great opportunity.  I am absolutely blessed to have such an awesome village that now includes The Hemel Storm family’.

Storm’s Director of Coaching Jon Burnell “Williams has the ability to impact the game at this level in a number of ways, his defensive desire, high outputs on the glass and natural scoring ability will provide great entertainment for our sell-out crowds. It has been a long process trying to find a guard that would complement the current line-up we have recruited and we believe we have found him in Mike. It’s massively exciting for our team and the wider community to have Mike with us.” 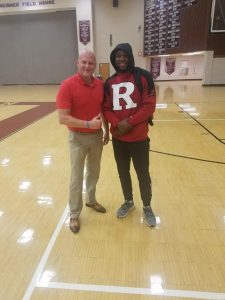 After Greg Poleon, was signed by Storm, I mentioned that I looked forward to working together with Chairman Tony Humphrey and Director of Basketball Jon Burnell again. I had no idea that it would be almost immediately! It brings me great pleasure to be able to bring the Storm fanbase another player for the upcoming season. Mike has played at the highest levels of NCAA college basketball - Division 1 in the BIG 10 Conference-where he competed against eventual NBA players as well as some of the toughest competition in college basketball. As Tony and I negotiated Greg’s contract with the Storm, we discussed the possibility of pairing an elite scoring and rebounding guard with Greg. The idea was brilliant as Mike and Greg are both from Brooklyn, New York and already know each other. The Storm fanbase will be pleased with Mike’s leadership, toughness, competitiveness, and his winning mentality all of which endeared him to Rutgers faithful. I am delighted he is competing this season with Storm. And, hey Storm fans, Mike’s birthday is September 23 so wish him a happy birthday when you see him!’

The final word to Storm Chairman Tony Humphrey “The Storm roster is now complete. It’s been a busy summer and we have a roster to be very proud and excited about. I thank our sponsors who have yet again provided us with the resources to do something very special for Hemel Hempstead. We now need the new and even bigger StormDome packed with support because more than anything I want the coaching team, players and fans to enjoy the season ahead”.