Storm win the National Cup with a tremendous second quarter 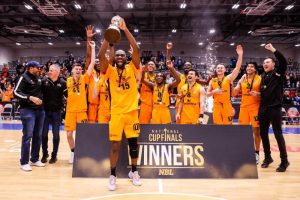 Sunday’s match saw Vanarama-sponsored Hemel Storm face Derby Trailblazers in the National Cup Final with the first trophy of the season at stake for the winners. After an outstanding 41 points were scored in the second quarter, Storm claimed the cup, showing some fantastic passing and impressive shooting winning the game 81-102.

The first quarter was an incredibly tight one with both teams learning each other’s tendencies as this was the first time they had matched up against each other. It was Storm who got off to a flying start leading 0-7. However, this was swiftly responded to by the Trailblazers, with May-Thompson scoring 2 3 pointers in a row to bring the lead to within 1. The scoreboard continued to swing in favour of both teams as they were cancelling each other out with similar shots scored. It was Derby who led at the end of the quarter winning 20-19.

The second quarter started just like the first quarter until a Taylor Johnson and one play gave Storm momentum, forcing Coach Shaw into a timeout after a Newman dunk off a turnover from the Trailblazers. Storm continued to dominate and showed the same capabilities of shooting as they did in their previous fixture, which started to pull Storm into a comfortable lead. Even though, Storm shot with exceptional accuracy, they also showed their strength on defence, preventing Derby from scoring easy shots. An amazing effort led Storm into the half time break leading convincing 38-60. 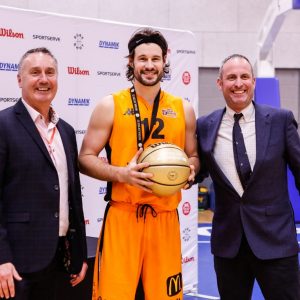 Both teams came out with different mentalities to start the second half, with Storm needing to ensure that their defence stopped Derby from making a miraculous comeback. The third quarter was the same story as the first quarter with both teams cancelling each other out in terms of scoring, which worked in Storm’s favour, giving them confidence to continue to chip away at the scoreboard, getting closer to 100 points. Although Derby won the quarter by 2 points, it in fact benefited Storm more, meaning they could use their 24 seconds to run down the game clock. Storm went into the final quarter 65-85; only 10 minutes of basketball away from glory.

With Storm winning by 20 points, they had to ensure that they approached the last quarter with discipline and professionalism to complete the game winning by this margin. Although the tempo of the game had slowed down, Storm were continuing to defend their basket well limiting Derby to difficult shots, which was a contributing factor as to why the Trailblazers scored 16 in the last quarter. Storm players and fans enjoyed the remaining quarter as although Storm scored only 17 time was running out, giving Coach Spinks the opportunity to field players from the bench for the remainder of regulation. The final buzzer sounded with Storm winning 81-102, winning the prized cup.

It was a fantastic effort from Storm, who demonstrated their team mentality throughout the game and came away victorious. Although Taylor Johnson scored 41 points and received MVP, it was a team performance to remember with vital passes creating the uncontested shots including an impressive 16 assists from birthday boy Sam Newman.