The talented and well-organised visitors included five overseas players in their line-up but could not suppress Hemel’s tenacious defence and fast breaks and despite trying to stem the flow by calling a time-out after only four minutes of action found themselves trailing 26 – 14 at the end of the first period.

Vanarama-sponsored Storm’s recent American signing A J Roberts was in irrepressible form instigating and at times finishing his team’s fast breaks and eventually top-scoring for his new Club with 30 hard-earned points. AJ converted on just over half of Hemel’s first period total with 14 points.

But it was a combined defensive effort by the home team’s starters – Roberts, Bode Adeluola, Lee Greenan, Mike Darlow and David Ajumobi – that set the tone and drew praise from Hemel Head Coach Robert Youngblood who was scathing of his team’s lack-lustre defence against Ipswich in the National Cup last Sunday: “We worked extremely hard in practice this week and came out against Newcastle with terrific energy and togetherness. I liked the way we competed and played hard and that we also had good leadership on the court.”

Both sides substituted freely in the second period and Storm’s depth and versatile player combinations continued to give them the edge.

With leading scorers AJ Roberts and David Ajumobi both resting for some of the second period Storm was still able to stay ahead despite the visitors connecting on three three-pointers. A defence dominated stanza ended with Storm leading 42 – 32 at half-time.

“Holding them to 14 and 18 points in the first two periods showed the defensive improvements we’ve been making,” said Coach Youngblood, “and those numbers are just about within our defensive goals.”

But Storm started slowly after the half-time interval and a feisty Newcastle got within four points 63 - 59 after making nine trips to the free-throw line and scoring from eight of them.

Storm regrouped and after trading baskets in the early part of the fourth quarter they put together an 11 – 5 run that had the home crowd sensing victory as they chanted “de-fence, de-fence”.

In an astute coaching move by Youngblood, Storm was able to neutralise Newcastle’s offence with an unusual player combination featuring five players all around 6’ 5” in height  - Roberts, Mike Darlow, Walid Mumuni, Wayne Yeboah and David Ajumobi – which forced the visitors into taking long range shots and denied them any rebounds.

And with a terrific effort by all five Hemel players, Ajumobi played outstanding individual defence on Newcastle’s Fran Urli a prolific 6’ 8” Croatian forward who led his team’s scoring with 20 points but was held scoreless in the final crucial four minutes.

With just over two minutes to play AJ Roberts stretched Hemel’s lead to 80 – 69 with two free-throws after he was fouled on a lightening quick drive to basket and the teams traded baskets to the final buzzer. 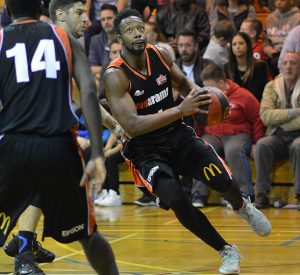 “It was a much improved performance,” said a delighted Youngblood, “We held them to low scores in three of the quarters which is pleasing but we’ve got to improve after half-time of games because we tend to let-up a little.”

Storm are next at Sportspace on Sunday November 12th against Worthing Thunder, tip-off at 5pm in a National League Division One clash. Tickets available from the 'ticket & shop' drop-down menu above

Next weekend Storm is away to Lancashire Spinners on Saturday in the League and next day visit Kent Crusaders for a fourth round National Cup game.