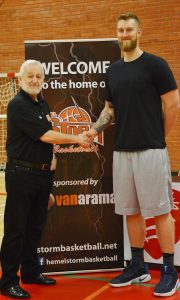 Hemel Storm has signed Lee Greenan an experienced and dominating  seven-foot centre and former Great Britain under-20 international as the Club bids to strengthen its team to compete for silverware next season.

Greenan who played professionally in France is currently studying at the University of Essex and is a part of their elite sport scholarship programme.

Dave Titmuss, Head of Storm’s Basketball Programme is delighted to have secured Greenan’s signature and believes the 27 year-old will flourish at the Club and play an important role in the team’s push for national honours.

“Lee has great instincts for the game and has been playing since he was 14 years old,” said Titmuss. “The impressive thing is that he’s still developing as a player and is potentially the best big man in the League.

“Aside from his obvious attributes I was immediately impressed with his demeanour and the fact that he especially wanted to be a part of the Storm family. He’ll fit in very well with our guys”.

After signing for Storm Lee said: “I can’t wait, it’s really exciting. I’ve started my preseason training already and I’m good to go! Everyone you speak to has good things to say about Storm. It’s Division One basketball where I think I belong.”

Lee added how much he appreciated the Vanarama–sponsored Club’s reputation for professionalism, its coaching programme and amazing support at home games.

The seven-footer competed for the university last season and led them to an undefeated campaign, a National Trophy and promotion to the British Universities and Colleges Sport premier division.

Titmuss commented: “The performance programme at the University of Essex has been a terrific influence on Lee and especially the sports science aspects. He’s in the best shape of his life and ready to be an important part of Storm’s future.”

Director of Sport at the University, Dave Parry, is also delighted with the progress that Lee has made: “Our scholarship programme is based around an athlete-centred approach and so it’s great to see Lee stepping up to Division 1, especially with Hemel Storm, one of a number of close partner organisations that we have.”

Lee is no stranger to success. He represented England at u-16 and u-18 levels and Great Britain at under-20’s. He attended Barking Abbey Sports College for three years and competed with Essex Leopards in National League Division One. After college he played professionally for St Dizier Basket where the French Club won promotion, he then returned to play for Ipswich in Division Two.

Storm’s new Chairman Tony Humphrey said: “It’s great news to have signed Lee, he joins us at an exciting time for everyone associated with the Club. Having established ourselves in Division One we want now to push on and with the help of our growing number of commercial partners see Storm consistently challenging for national honours in the seasons ahead. We’re excited about the direction that the Club is headed.”

Storm is expected to announce details in the coming weeks of their Coaching Staff for the 2017/18 season and updates about returning and new players.