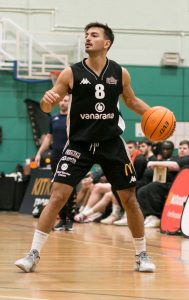 Saturday’s game saw Vanarama-sponsored Hemel Storm travel up north, facing Bradford Dragons in a bid to continue their perfect form this season. After a tight first quarter, Storm raced off to a gigantic lead showcasing their sensational three point shooting to carry them to a 93-131 win.

Storm were slow to get started in the first quarter which saw Bradford Dragons take a four point lead. After a defensive mishap allowed Dragons’ star player Whelan an open lane to the basket, Dru Spinks used his first timeout to refocus the Storm players and stop the Dragons scoring run. Storm were patient coming out of the timeout, using quick passing to create an open shot, which worked in their favour as they took the lead with 4:20 left in the first period. Storm were able to gain control of the rest of the quarter going into the break, winning 28-30.

It was an exceptional start to the second quarter as they began to show their accuracy from the three point line extending the lead to 8 points, which forced Dragons coach Mellor into his first timeout of the game. This did not affect Storm in the slightest as they went on an unbelievable 33-5 scoring run, securing key transitions and connecting with the shots. Both Taylor Johnson and Seth Swalve benefitted from this as at the half Johnson had 21 points and Swalve registered 17 points, most of their points coming from beyond the arc. This run was vital as Storm went into the half time break, comfortably winning 41-74. 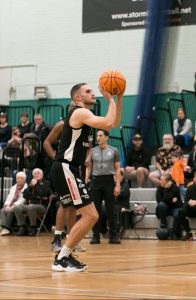 Continuing to pile on the pressure, Storm were quick to extend the lead to a substantial amount as they continued to utilise their strength inside the paint and outside the three point arc. What went unnoticed in this quarter and throughout the whole of the game was the sharp, quick passing to create open shots for Storm, which overall exhausted the tiring Dragons defence which played in the favour of Storm. With 1:35 left of the third quarter, Jack Burnell secured the 100 points with a three pointer, followed by another from Tayo Oyefusi which extended the lead to a game high of 45 points. However, Dragons did not give up, Edwards connected with a three point buzzer beater to send both teams into the final quarter with Storm in a convincing lead 66-107.

The final quarter gave Storm the chance to rest their starting five for their important National Cup final next Sunday which did see the Dragons go on a 12-0 scoring run, giving Coach Spinks no choice but to call a timeout to make sure the players continued to play with the same professionalism as they did in the first three quarters. Storm showed a good reaction and were able to score points of their own, making sure that Storm were to win the game convincingly. The final buzzer sounded with Storm taking the victory, which gives them an 11-0 status in the league.

It was a fantastic performance and a professional display from Storm as 87 of their 131 points came from three point range.  As for the opposition, they move to a 5-7 record in 10th place, also moving to a negative points difference after Storm’s masterclass.

Storm’s next game is the National Cup Final on Sunday 22nd January against Derby Trailblazers at the National Performance Centre in Manchester, with the first silverware of the season up for grabs.