Storm tame Leopards in front of a capacity crowd 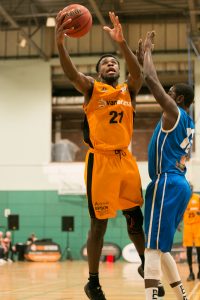 No one knew quite what to expect when Vanarama-sponsored Hemel Storm took on Essex & Herts Leopards on Saturday night. Leopards have spent the season in the bottom two of the league while Storm ride high in second place, but with the demise of BBL franchise London City Royals, they have picked up displaced players. In fact, they signed 4 new players, two of whom are internationals, so it was in effect a brand new team who took the court.

Indeed, one of them, England international Orlan Jackman, laid down a marker in the first possessions, hitting two long range shots to show intent. Leopards took a 14-13 lead but that was to be the last time they led as a 9-0 run took Storm into the first break 22-14 up. 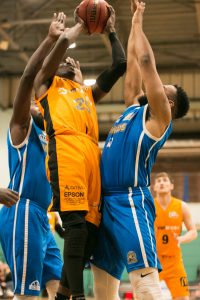 After trading baskets in the second period Williams and Mumuni hit long range shots to pull Hemel away. After 4 minutes a 20 point lead had been established and as the third quarter progressed Mike Williams took  the lead up to 25 as Storm were cruising playing great team basketball and excellent defence.at the end of the third they led by 81-55 and a hammering was being handed to the new look Leopards and a message sent to the rest of the league.

What followed in the fourth quarter was the most bizarre ten minutes of basketball you will see as a dominant Storm, who had only conceded 55 points gave up 38 in ten minutes as Leopards were gifted baskets from turnovers and left open to drain three pointer after three pointer. From being thrashed, they came to have a chance to win the game as they fouled to stop the clock and gain possession, pulling it back to a five point game before Storm saw out the game 99-93. The win keeps Storm in second place before they take on third placed Thames Valley Cavaliers next Sunday.

Storm have a double header this weekend, travelling to Loughborough on Saturday. Followed by a crucial home game on Sunday against Thames Valley Cavaliers at Hemel Leisure Centre, tip off 5pm. Tickets available at www.stormbasketball.net