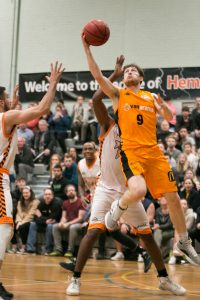 l to their third straight defeat on Saturday night losing 92-64 at Worthing Thunder. Having lost just three games all season they have now lost an additional three games in a week and the chance to play the play-off games at home is now under threat.

Storm had a size advantage against Worthing but could not get the ball into big men Greg Poleon and Jordan Jackson. Instead they were reduced to long range efforts, often taken under pressure, as Worthing’s aggressive man to man defence proved too much for the Storm offence to manage.

Storm gave away 25 points from turnovers as the pressure caused errors in the front court. Bizarrely, despite having the height advantage, Worthing scored 46 points in the paint whilst Storm managed only 18. They were out rebounded 52-42. Not a good day at the office.

Storm never held the lead and their biggest scoring run was just 6 points. Down 21-11 after the first quarter they conceded 31 points in the next 10 minutes as their defence was as ineffective as their offence. 52-27 at the half meant the game was over and Worthing saw out a very comfortable victory with ease.

Storm shot just 33% from the field and took 12 less shots than their opponents as control of the boards and turnovers paid their price. Greg Poleon hit 15 with 13 boards, Mike Williams hit 14 and Sam Newman 11.

Storm will look to get back to winning ways this Saturday (29th) when Bradford Dragons are the visitors at Hemel Hempstead Leisure Centre, 7pm tip of. Tickets available at www.stormbasketball.net