Two hard fought victories on the road for Storm

Vanarama-sponsored Hemel Storm secured second place in NBL Division 1 and progressed to the next round of the National Cup with two hard fought wins over the weekend. 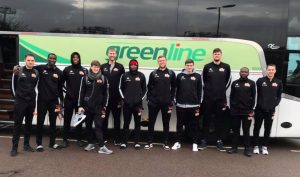 Hemel travelled to Bradford who had not started the season well but won their last two games, with expectations of victory, but this would be hard earned.

Albert Margai’s trey sent Chris Mellor’s team into the first break 22-17 ahead, and Fetske’s triple made it a 13 point game going into the final minute of the half before Hemel’s American pair Greg Poleon and Mike Williams hit a basket to make it 49-40 at half time. For the third week in a row, Hemel had conceded almost 50 points in the first half.

The third period proved to be crucial, with Storm outscoring the hosts 19-10, with back to back Lee Hodges baskets putting the visitors 59-55 ahead with two minutes remaining.

Fetske tied the scores at 59 going into the fourth period, and a pair of Richard Sulcs free throws looked to have put Dragons in charge with a 7 point lead going into the final seven minutes.

But two Sam Newman treys tied the score at 78 with 1:32 on the clock before Margai and Williams traded baskets.

Margai had a shot to win it, but Hodges grabbed the rebound and the game was sent into an extra period.

Bode Adeluola hit a pair of treys in overtime as Hemel never trailed, and despite Fetske also converting from the land of plenty, Hemel sealed the win from the foul line.

Fetske scored 6 of 19 three pointers and added 13 rebounds in a 35 point haul for Bradford. Margai added 15 points and 7 assists but 9 turnovers, while Sulcs had 12 points, 7 boards and 7 assists.

Williams led Storm with 24 points while Adeluola added 18, 5 boards and 3 assists. Poleon finished with a 17 point 13 rebound double double and Newman had 16 points to go with his 6 boards and 4 assists.

Hemel again conceded 52 first half points against Leicester Warriors in the National Cup on Sunday trailing 52-48 at the break. The third quarter was again crucial as Storm held the opposition to 13 points whilst adding 18. A 26-24 final quarter allowed Storm to squeak through by 3 points, 89-92.

Photo: The double away weekend was made easier thanks to the use of the Green Line Coach from our sponsors Arriva.

Storm return to the “StormDome” this Saturday, tip off 7pm, when Barking Abbey Crusaders are the opponents. Storm II also take to the floor before the main game with their tip off at 4.15pm at Hemel Hempstead Leisure Centre. Fans can watch both games for the same price as a usual game. Tickets available at www.stormbasketball.net.