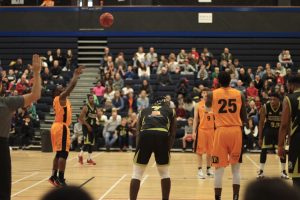 Vanarama sponsored Hemel Storm returned to winning ways with a 116-84 victory over local rivals Leopards on Sunday. The nomadic Leopards have played in venues as diverse as Harlow, Dagenham, Colchester, Barking and Ware and have now based themselves 10 miles away at Oaklands college in St. Albans. As if to continue tradition, the game was played 40 miles away in Brentwood, Essex.

Leopards are winless this season but started much the brighter, going on a 9-0 scoring run to lead 35-21, their offence penetrating the Hemel defence at will and their long range shooting proving very effective. The porous defence needed urgent attention as Storm conceded 35 points in the first ten minutes to the bottom of the league opponents to trail 35-28 at quarter end.

A 9-2 run at the start of the second period, sparked by 5 points from Sam Newman gave Hemel their first lead of the game at 41-40. Leopards regained the lead but a 12-0 scoring run put Storm in a degree of control with a half time score of 59-51.

Storm had now found their groove with point guard Bode Adeluola proving a menace from the drive and downtown shooting, supported by a very efficient high percentage shooting display from Mike Williams. A 33-17 third quarter gave them a lead of 92-68 and they wrapped up victory with a 24-16 fourth period.

Abdul hit a game high 37 points for Leopards, while Okoro finished with 29 points and 10 rebounds.

Storm have a double header away weekend. They travel to Thames Valley Cavaliers on Saturday in league action and Sunday sees them begin their National Cup campaign away to BC Medelynas London on Sunday. Away travel is available to both games. See www.stormbasketball.net for more details.