Storm bounce back from Bradford Loss 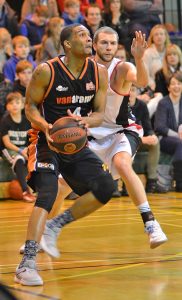 A depleted Hemel Storm lost 67 – 77 at home to Bradford Dragons on Saturday in a National League Division one game but bounced back next day to clinch a narrow 70 - 67 victory on the road over Derby Trailblazers.

Hemel faded in the second half at home on Saturday after taking a 42 – 31 lead into the dressing room. They were without starters Lee Greenan and Michael Darlow as well as sixth man Courtney Van-Beest and guard Rhyce Donegal. Greenan was unavailable because of a family wedding and the other three players were injured.

Despite their reduced roster Vanarama-sponsored Storm looked in control against a spirited and physical Dragons side as triples from A J Roberts and Jack Burnell combined with some hard nosed defence saw them lead 19 – 10. But Bradford’s American forward Ricky Fetske twice made impressive individual moves to close the quarter with four points without answer and keep the Dragons in touch at 19 – 14.

A triple from the visitor’s Eisley Swaine knotted the scores at 19 within two minutes of the restart and Storm’s Head Coach Robert Youngblood called a time-out that inspired his team to go on a 20 to 2 run which included 10 points from Roberts and push Hemel into a 35 – 23 lead. The teams traded baskets on the next few possessions of the half with Storm owning an 11 point lead as the buzzer sounded.

After the break nothing seemed to go right for the home team as Bradford switched defences and turned up the pressure. The Dragons went on what proved to be a match winning 22 – 5 run of their own to forge ahead 53 – 47 a lead that they would not surrender again. Seemingly there was a lid on the basket that the Storm players were attacking as even close range attempts wouldn’t fall for them and they eventually lost the period 23 – 9.

Storm’s Head Coach Robert Youngblood said: “We were short-handed and it showed with two starters and one of our key bench guys missing.

“We played really well in the first half but just ran out of gas in the second with a number of the guys logging big minutes. We just got tired and it showed at both ends of the court.

“Although we lost the game, AJ (Roberts) was in great form and top-scored with 25 points and Jack (Burnell) really stepped up, he hit 16 points including four three-pointers and showed much improved individual defence which is the result of the work he’s been putting in at practice.”

Sunday’s clash with Derby was a nail-biting affair for Hemel’s travelling fans as the result was in doubt right to the final buzzer. After falling behind 22 – 14 after the first period, the home team came out with an impressive performance in the second stanza to take control and turn the tables on Hemel to lead at half-time 41 – 34.

Greenan and Van-Beest returned to the line-up for the game and Greenan underlined how much he was missed the night before by dominating close to the basket at both ends of the court eventually scoring 16 points – including four massive dunks - and grabbing a season high 16 rebounds. Storm’s overall rebounding advantage (48 – 36) and shooting accuracy (44 per cent to 34 per cent) were key factors in the win.

Coach Youngblood said: “We made some adjustments in the break and took the court ready to play much improved defence. We held them to only 26 points the entire second half. Our team and individual defence was fantastic”. 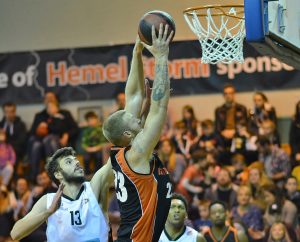 Hemel’s recovery was complete when Burnell hit a go-ahead triple to put Storm in front 62 – 64 with two minutes left to play. And Hemel’s relentless man-to-man defence was decisive as with the scores tied at 67 apiece Derby were held scoreless on their last four possessions.

A powerful inside move and lay-up by Hemel’s Dave Ajumobi and a free-throw from team captain Bode Adeluola (16 points and 9 assists) sealed the victory.

Commenting on the bounce back win, Coach Youngblood said: “We were really focused early in the game and were ahead by 10 after the first quarter but our defence in the second period was poor.

“Lee was in top form with a scoring and rebounding double-double and I thought that Bode controlled the game well”.

Storm take on League leaders Loughborough Riders in a crucial Division One game at Sportspace on Saturday, tip-off 7pm. The game takes on even more significance because Storm has drawn Riders in the National Cup Semi-Final which is being played the following Sunday (December 10th) at Sportspace, 5pm tip-off.

Tickets are available from the 'tickets & shop' drop down menu above