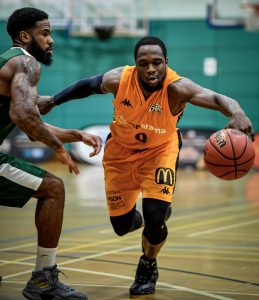 Vanarama-sponsored Hemel Storm celebrated a winning weekend with their best performance of the season, winning away at Thames Valley Cavaliers on Saturday evening and following up with a victory in the National  Cup at BC Medelynas on Sunday.

Cavaliers and Storm have both had good starts to the season and both posted 4-1 records. Thames Valley had been led by their two American imports, Mclemore and Johnson, but it was Storms Americans who stole the show. Mike Williams led all scorers with 34 points on superb 67% shooting and Greg Poleon hit 21 and took 10 rebounds earning a double double in just 19 minutes before fouling out in the fourth quarter.

Thames Valley opened up with a 6-2 lead and that was to be their biggest lead of the night as Storm played great team basketball and led by 5 at the end of the first quarter 33-28. A back to form Sam Newman paced the second quarter on his way to 19 points, helping to stretch the lead to 63-51, Storm hitting 11 unanswered points. Lee Hodges once again dominated the rebounding with 13 boards and had 17 points for his double double, but points were coming across the team.

The third quarter was an even affair but Storm were withholding whatever was thrown at them including 18 points from ex Storm Blayne Freckleton and ran out winners by 113-103. Bode Adeluola added 12 points for Storm whilst Mclemore led Cavaliers with 24 and Syllable had a huge 18 rebounds and 22 points.

Sunday’s cup game was against a Division 2 Lithuanian team based in London. Storm were only allowed to play one American and in respect of the size of the opposition, Greg Poleon got the call with Mike Williams sitting out. This proved a good call as Greg was unstoppable with his jump shot from the top of the key, leading all scorers with 29 points. Sam Newman completed a good scoring weekend with 20, Bode hit 16 and Jack Burnell made 13.

Coach Spinks: “Some positive steps taken this weekend. We are pleased with our collective approach to this double header. In both games there were moments of struggle, and it was pleasing to see the manner of the teams response. They showed encouraging signs at this stage of the season.

We had some really good moments and displayed a real commitment to our technical execution, tactical execution and team behaviours…however we recognise there is a lot of work to do to meet our standards. We are looking forward to working on these as we move forward.”

Storm return to the “StormDome” this Saturday when Loughborough Riders are the opponents. Tip off 7pm at Hemel Hempstead Leisure Centre. Tickets available at www.stormbasketball.net.