Hemel Storm’s game against Bradford Dragons at Hemel Leisure Centre on Saturday was delayed 45 minutes when guard Will Ashby crashed to the court and dislocated his arm directly under the visitors’ basket early in the third quarter.

Paramedics treated Ashby and the hushed home fans stood to applaud him as he left the arena on a trolley for hospital. Ashby is recovering at home and is not expected to return to the team until late January. 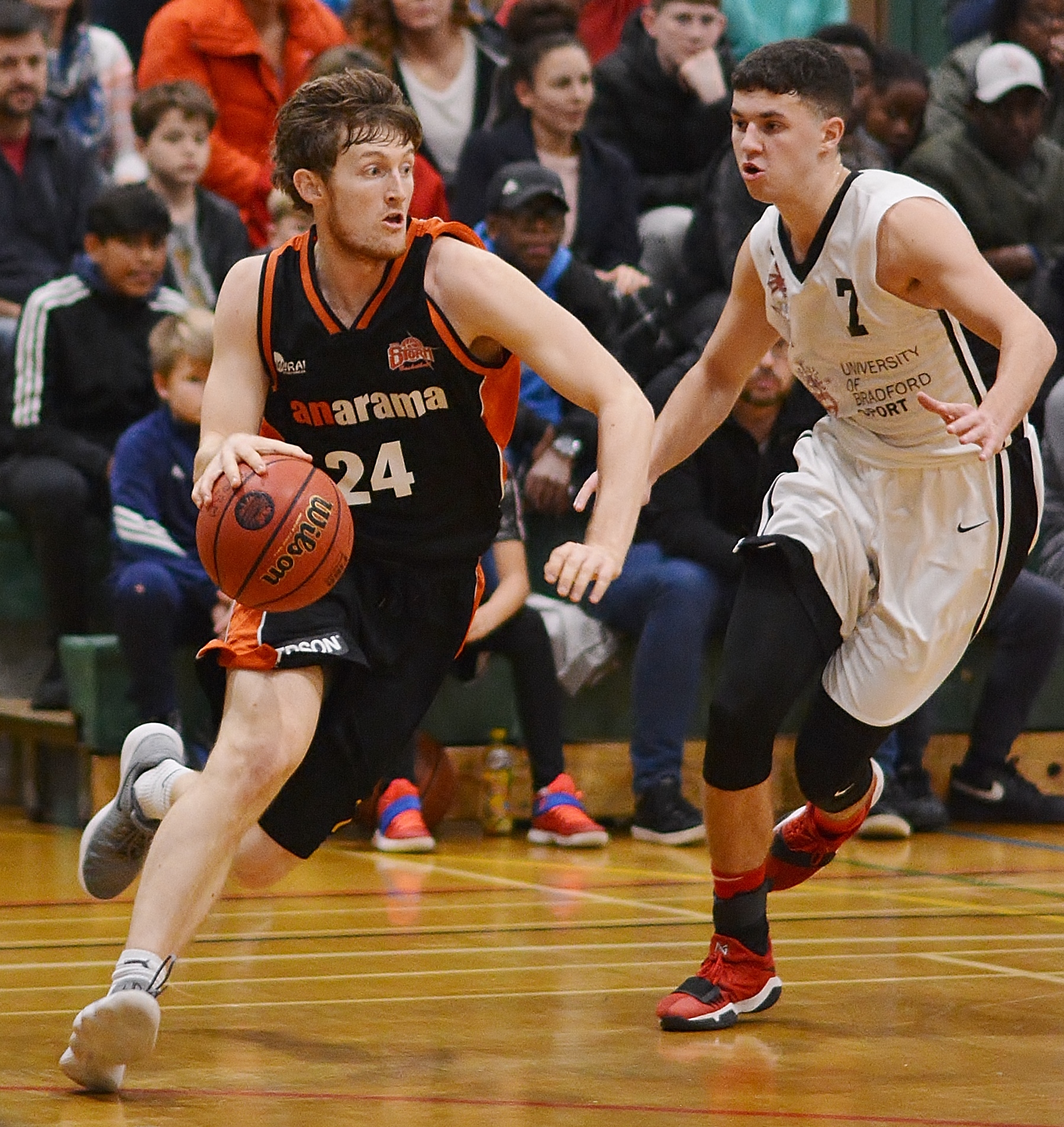 A display of outstanding shooting by Bradford punished Storm’s porous defence as the visitors got off to a dominant start leading 31 – 17 after the first period. The Dragons were breathing fire from outside the arc as they knocked down 11 triples at a 45 per cent success rate on their way to a 30 point lead mid-way through the third period that they held until the final buzzer.

Vanarama-sponsored Storm rallied in the fourth quarter winning it 29 – 25 but it was too little too late. Levi Noel had 18 points for Hemel and added six rebounds and two assists, Tom Adorian added 12 points and grabbed seven rebounds while Leome Francis came off the bench to chip in 10 points and three rebounds.

Storm completed their back-to-back weekend by heading to Reading for a Sunday afternoon match-up. An improved performance on the previous night saw them trail by just one point, 61 – 62 going into the final period.

But Hemel’s offence dried-up and their man-to-man defence conceded an 18 – 1 run that included four consecutive three-pointers which killed the game off as a contest. Despite pulling the Reading lead back to 10 points (74 – 84) a flurry of scores down the stretch saw the Rockets pull away again.

For Storm, Blayne Freckleton knocked down 11 free throws on his way to a 31 point effort to pace the Storm, while Levi Noel chipped in 13 points and six rebounds.

Hemel’s Associate Head Coach, Dave Titmuss said: “I think we need these tough games to refocus our priorities as a team. We’re just not firing on all cylinders at the moment but results like these will only strengthen our resolve to get better. It’s still early days.”

Storm will face two more stern tests at the weekend as they travel to the undefeated League leaders Solent Kestrels on Saturday in a Division One clash, and then return home to Hemel Leisure Centre to face the League’s second placed team, Worthing Thunder, on Sunday in the quarter-finals of the National Cup, tip-off 5pm. Storm are the current Cup holders. Tickets and information go to the tickets & shop tab above

Photo caption: Storm’s Will Ashby who was stretched off on Saturday against Bradford

Hemel’s second team recorded another emphatic win in National League Division 4 beating London Utd II by 45 points.  It was London who grabbed the first four points of the contest but that was as good as it got for the visitors as ten straight points from Storm’s Nick Allin kick started the home team and drove them to a four point first quarter lead.  Hemel’s young point guard would go on to deliver an impressive set of stats with 28 points, 10 assists, 5 rebounds and 4 steals.

Storm’s suffocating defence allowed United only 5 points in the second quarter as Hemel raced to a 37-29 half time lead.  There was no way back for London as the hosts continued their onslaught in the second half to give them successive home league wins.

The game saw a welcome return to the club for veteran guard and former first team captain Simon ‘Spud’ Kearney.  Spud, a former GB under-20 player has had a highly successful career in Division 1 with Hemel’s first team and brings invaluable experience to the second team.

Coach David Allin said: “We had some good individual performances today but I was really impressed with how we performed as a team.”  And he added: “It’s fantastic to have Spud in the squad.  Although his work prevents him from playing every week, his experience and composure will be a massive asset to us.”