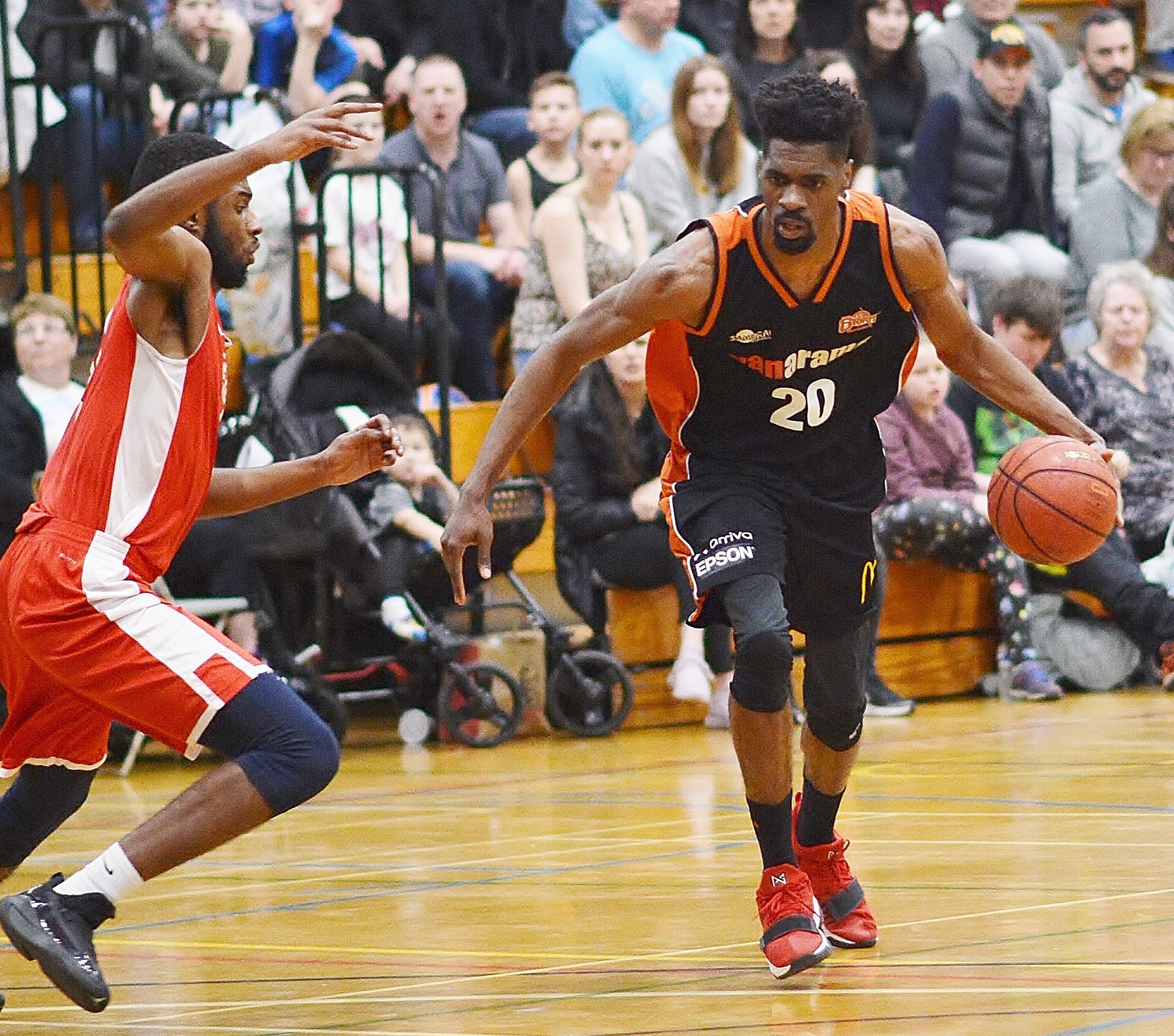 Hemel Storm shocked local rivals Essex Leopards in Brentwood on Sunday with a rampant 34 – 12 third quarter onslaught that led to a 96 – 84 victory and avenged their two point loss at home to the big cats two weeks ago.

Storm controlled the game against Barking from the tip-off and an eye-catching six triples in the first quarter by Blayne Freckleton triggered a 31 – 16 Hemel lead that ballooned to 57 – 31 by the half-time break.

A spirited second half fight-back saw Barking take the third period 25 – 21 and the team’s tied the fourth, 27-all but the Storm damage was already done.

The winning weekend moves Vanarama-sponsored Storm up to tenth spot in the table and keeps them on track for a place in the end-of-season National Championship Play-Offs featuring the top flight’s leading eight Clubs.

And Hemel’s late season signing 6’ 7” TrayVonn Wright has for the second week in a row won the Basketball England ‘NBL Player of the Week’ award after a sensational combined 51 points, 23 rebounds and five blocks across his team’s two victories.

Since Wright joined Storm from BBL side Leicester Riders just days before the signing deadline Hemel have won five of eight games with the American forward in the line-up.

“TrayVonn was fantastic in both games and at both ends of the floor,” said Hemel’s Head Coach Robert Youngblood.

Before Sunday’s rivalry match-up with Essex, their Coach Tom Baker said the game had “bragging rights attached to it,” but was gracious in defeat: “We knew Hemel had the quality to hurt us and credit Coach Youngblood and his team, they executed extremely well in the second half.”

Storm trailed Leopards 46 – 38 with less than 20 seconds of the first half remaining when Hemel’s Freckleton nailed a trademark three-pointer to keep his side in touch at 46 – 41.

After a tense and even first period (23-all) Hemel fell behind by ten points, 43 – 33, as the home side went on a 14 – 4 run before the visitors recovered on the back of three-pointers from Levi Noel and Freckleton assisted by Bode Adeluola who also kept his team in touch with two unstoppable drives to basket.

During the interval Coach Youngblood demanded a better rebounding and defensive effort from his team.

“I went a little crazy about the rebounding and our defence,” said Coach Youngblood,” and I reminded the guys that winning both games over the weekend meant we could start to look up the table and stop looking down it.”

The players responded by shutting down the home team’s key players, controlling the boards and pushing the score out to 75 – 58 through well-executed attacks and confident shooting.

During the match-winning third period Freckleton and Will Ashby sank two three-pointers each and Adeluola - Hemel’s eventual top scorer with 27 points and 10 assists – hit one of his own.

At the half-time break Levi Noel was assigned to negate Leopards’ talisman Sam Newman and his performance drew praise from his Coach.

“Levi’s lock-down defence in the first eight minutes of the second half was key to our run and then Will (Ashby) took over for the rest of the game and made a big contribution at both ends of the court.

“Everyone was great this weekend, we showed a terrific team effort in both games,” said Coach Youngblood, “we shot the ball much better than in recent games, we kept our turnovers down and rebounded really well on Saturday and in the second half on Sunday”.

And the Head Coach also recognised some individual step-up performances against Essex from captain Tom Adorian (10 points and 12 rebounds), who held seven-foot centre Lee Hodges to 16 points in a one-on-one battle; as well as Jamie Hayes who covered for the injured Leome Francis: “I was really impressed with Jamie’s defence and work ethic, they were second to none,” said the Coach.

Storm are away to Nottingham Hoods on Saturday.

Photo caption:
Storm’s TrayVonn Wright, ‘NBL Player of the Week for the second time in a row.

Storm ‘s defence caused a few problems for the home team early in the game and gave the visitors a lead at 15 -11 after the first period.  But poor execution in the  second and third quarters effectively ended the game for Storm II as Canterbury romped into a 24 point lead.

Hemel rediscovered some form in the last period on the back of a fine offensive performance from forward Lewis Castro.  But it was little consolation for Hemel who have struggled away from home all season.

Head Coach David Allin said: “We were beaten by a much better team today.  There were glimpses of what we are capable of but we didn’t cope well with their defensive intensity.  We didn’t really create any easy scores for ourselves.”