‘Too many mistakes’ cost Storm 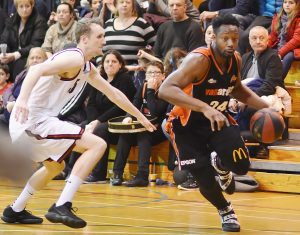 Hemel Storm’s see-saw season continued on Saturday when they went down 92 – 73 to Northumbria at Sportspace in an under par National League Division One performance.

Vanarama-sponsored Storm who won the National Cup just a few weeks ago were without their captain and mercurial point guard Bode Adeluola and never got into any kind of rhythm against the well-organised and sharp-shooting visitors.

Back in November Hemel had beaten Northumbria comfortably 89 – 66 in the reverse fixture. Since then Northumbria have added American guard Atif Russell to their roster and on his debut against Storm he sank 21 points, grabbed six rebounds and threw six assists.

Storm fell behind from the opening tip on Saturday when Blayne Freckleton connected on back-to-back triples, and lost the first three quarters as Northumbria steadily built a commanding lead.

For much of the game the home side’s possessions were harried and pressured and their usually slick attacks and fast breaks too often ended in hurried shot attempts which inevitably cut down their field goal success rate to 41 percent.

Hemel was able to win an 18 – 15 consolation final period but entered the last ten minutes trailing 58 – 77 and their improved efforts in the last stanza couldn’t affect the outcome of the game in this uncharacteristic performance.

Storm slip to fifth in the table with eight games remaining and are now fighting to finish in the top four and win home advantage in the end of season play-offs.

Storm Coach Robert Youngblood said: “Although I give credit to how Northumbria defended us there was nothing about it that we haven’t faced before.

“It’s difficult to account for how ineffective our overall play was or why players who have been consistent defensively all season just kept making mistakes. Northumbria shot well, no question, but we gifted them far too many open looks. 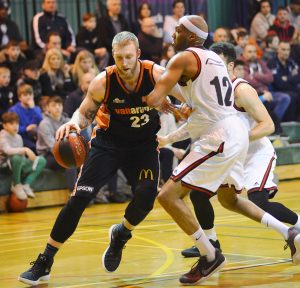 “We really missed Bode tonight but that’s not an excuse, our fans deserve a better effort than that from us. It’s not too late to put things right in training, we’re still focused on our goal to finish in the top four and it starts with our game away to Worthing next Saturday.”

Storm are next at Sportspace on Saturday February 24th when the visitors will be their Cup Final opponents, Manchester Magic. Tip-off 7pm. Tickets are available from the 'tickets & shop' drop-down menu above