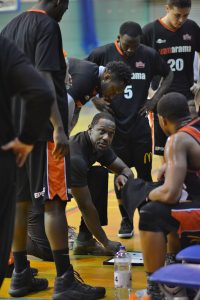 In a dress rehearsal for next Sunday’s National Cup semi-final Hemel Storm came out for the second half of their National League Division One game against leaders Loughborough Riders at Sportspace on Saturday with the scores knotted at 43 points apiece after a spirited performance.

But helped by accurate three-point shooting the visitors took over the game late in the third period as Hemel struggled to find offensive rhythm against their swarming defence and were guilty of defensive lapses that gifted Riders some easy close-range shots.

Riders were able to open a 10 point lead outscoring the home team 25–15 as the third period ended and although Storm mounted a late rally in the final quarter the damage was already done and Riders were able to secure an 86–73 win to remain top of the League.

Storm Head Coach Robert Youngblood was quick to point out that things will be different when Loughborough ride into town for the Cup semi-final: “Come next Sunday you’ll see a different Storm team for sure. We’ll be well prepared and ready to go to war. There’s nothing like a trip to a national final - but we’ll have to play hard for 40 minutes to get there.”

Vanarama-sponsored Storm who slip to fourth place in the table matched the visitors in just about every aspect of the game except for three-point shooting. Hemel hit their lowest percentage of the season at just two scores from 21 attempts while Loughborough shot at a success rate of 11 from 27 to garner 33 points from long range.

Storm started the game well but in a fast-paced opening period three triples from the visitors kept them in touch. Free-throws from Hemel’s Courtney van-Beest put his side 22–17 ahead with only seconds left in the period when the visitors’ Sesan Russell hit a jump-shot to close the gap to three points.

A tit-for-tat second period was kept close once again by Riders’ use of the three-point shot as they sank four efforts – all by different players – to Hemel’s one. 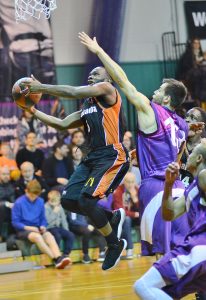 Coach Youngblood commented: “In the first half we played really well as a unit, we moved the ball well and our spacing on court was good. But in the second half we looked tired, slow and just didn’t compete”.

Storm face Riders at Sportspace on Sunday in the semi-final of the National Cup, tip-off 5.00pm.

Tickets are available from the 'tickets & shop' drop down menu above