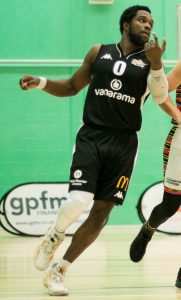 Two scores from Greg Poleon saw Storm off to a strong start but unlike last week’s record 46 point performance he was not the main offensive focus and for once not the leading scorer or rebounder. 5 points from Bode Adeluola and a Walid Mumuni 3 led Storm to an 18-9 lead but 6 points from Osobor pulled Bradford back to trail 20-16 after the first quarter.

Mike Williams was finding his shooting range as he hit 7 second quarter points as Storm stretched the lead to 8 at the half 38-30.

Bradford were without their leading scorer and rebounder Fetske and his absence was felt in the third quarter as Storm asserted themselves. Storm led 63-47 as the game entered the last period, notable for a 9-2 scoring run that put the result beyond doubt as the lead stretched to a huge 29 points.

A good all round team performance from Storm as they led Bradford in every statistical category and led from start to finish. Mike Williams led the scoring with 19 points, 4 rebounds and four assists, Levi Noel had 13 points, 9 rebounds and 4 assists, Greg Poleon 13 points and 9 boards, Bode Adeluola hit 12 points and Nick Allin, 10 points. Tayo Oyefusi led all rebounders with 12.

Storm have a double header this weekend, starting with a tough away trip to Team Solent Kestrels on Saturday, tip off 3.30pm. Storm welcome Nottingham Hoods to the Hertfordshire Sports Village on Sunday 14th March. Tip off 5pm. Due to the current restrictions there are no spectators, but the game will be streamed live on Hemel Storm TV YouTube page.