Fans treated to a thriller in first game back at StormDome 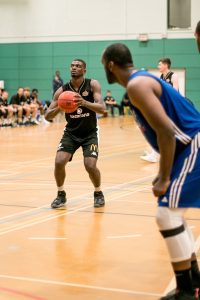 A narrowly fought contest gave the fans something to cheer about on their return as Vanarama-sponsored Hemel Storm beat Team USA Select 96-94 at the Hemel Hempstead Leisure Centre on Saturday.

It was a team effort from Storm throughout the game as Sam Newman, Bode Adeluola, Jack Burnell, Shaquille Lewis and new signing Johnathan Lashley got double figures in points. Hemel Storm were without star man and MVP last year Greg Poleon but that did not affect the team’s mentality and desire to win. They also played without American Taylor Johnson who only landed in the UK a few hours before tip off.

The first quarter saw Storm take the lead with Bode Adeluola, in his tenth season with Storm, scoring two layups before the energetic USA Select team raced off to a lead. Storm managed to close the gap to tie the game at 26-26 at the end of the quarter.

Strong defence and even better offence proved to be decisive as Storm raced off to a game high 13 point lead until USA Select showed off their physical and shooting attributes reducing that lead to 8. This meant that the score was 53-45 to Hemel Storm, completing an exciting first half.

The USA Select team upped their game in the third quarter with multiple three pointers, most notably from Captain and guard Seth Swalve who went on to achieve an impressive 32 points by the end of the game. The US team went up by 1 point at the end of the quarter after limiting Storm to only 23 points. 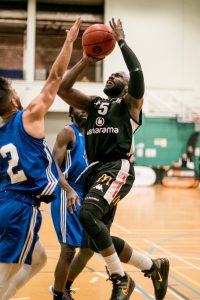 The fourth quarter showed why fans have been missed in the StormDome. The game was taken to the wire. Storm’s strong defence and offence proved to be pivotal but the fans made a massive impact. The chant of ‘defence’ bellowed throughout the StormDome with USA Select committing a 24 second violation with around a minute to go. The pressure was mounting on Storm, but with a three pointer by captain Bode Adeluola, they had turned the table and now led by 95-94. Bode then executed one of his two free throws at the end after Storm retained possession following  an unsportsmanlike foul on Shaquille Lewis. Storm survived the last offence by USA select with the game clock expiring just as the ball was about to be put in in the last seconds.

It was a valiant team performance with multiple players putting up double figures. New signing Johnathan Lashley looked exciting with 19 points and 8 rebounds. It was a thrilling game and a great test for Storm for future games coming up this season.

Storm are back at the Hemel Hempstead Leisure Centre playing Thames Valley Cavaliers on Saturday 18th September in the L Lynch Trophy, 7pm Tip Off. Tickets are available online at www.stormbasketball.net or can be purchased at the door on the night.