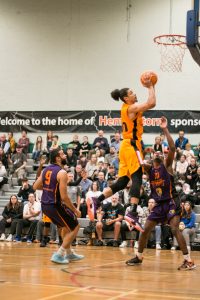 Saturday saw a hugely anticipated game featuring 3rd place Vanarama-sponsored Hemel Storm and 1st place Solent Kestrels in a game which was close throughout. Storm showed an impressive reaction to the previous loss the week before against BA London Lions and won this game 77-86.

In terms of players, Greg Poleon and Taylor Johnson put up their usual numbers of 26 and 25 points with 9 rebounds each and Shaq Lewis rose to the occasion with a brilliant 16 points, shooting 100% from the field. But overall, Storm as a team showed passion and determination which was the difference between the two teams.

Solent got off to a good start, going up 12-5 early before Storm replied with points of their own, including a Greg three pointer and dunk. Storm took advantage of the Kestrels tiring defence which allowed Storm to finish the quarter with a 0-9 run. Storm were up by 20-27 going into the second quarter.

Storm started the second quarter strongly as Taylor Johnson extended the lead to double digits, but Solent were quick to respond. Both teams were forced to call timeouts, with Storm calling one after a Solent lay-up was made and Solent calling one after a Taylor Johnson three pointer. This quarter, Solent were able to certify their dominance as they finished the quarter behind by a point going into the half time break.

The third quarter was a matter of using the possessions wisely for both teams, ensuring that they would not give up any turnovers which may lead to points. Defence was key in this quarter, in which a mix of missed shots and good defence were shown. Solent had clawed themselves back into the game and the scoreboard continued to show a change of lead. But a Shaq Lewis three pointer with one second to go broke the tied game and sent both teams into the last quarter with the scores at 56-59 in Storm’s favour.

This was going to be one of those games that went down to the wire in the fourth quarter when Elliot Dadds immediately scored a three pointer to tie the game before Shaq Lewis once again replied with another three of his own. Storm used the American presence of Taylor Johnson and Greg Poleon very well as they could shoot accurately and sustain a lead.  The game looked to swing in Storm’s favour with Greg Poleon scoring a three pointer with 5:50 left on the game clock. Solent acted swiftly to cut that lead back down to three before Storm responded again. This ended what could have been considered an unexpected win but overall, Storm were better at both ends of the court.

Storm face Bradford Dragons at home in the National League on Saturday 18th December, 7pm tip off, in what is Storm’s final game of 2021. Tickets to the game are available online at www.stormbasketball.net or can be purchased at the door on the night.