Mixed weekend of results for Storm 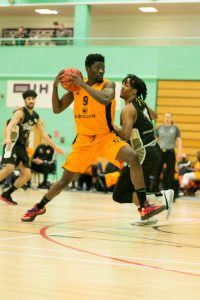 Mixed fortunes for Vanarama-sponsored Hemel Storm this weekend. On Saturday Team Solent Kestrels continued their relentless march to the Division One title by giving Storm a harsh lesson as they ran out winners by 90-65 whilst on Sunday Storm hammered bottom of the league Nottingham Hoods by 109-68.

In truth Storm were never in the game on Saturday. They started slowly and never really made a contest of it. The gap between first and third in the league looks worryingly huge as Solent comfortably won all 4 periods. The defensive efforts from the home side stopped dribble and pass penetration into the key whilst Storm defence continually left Solent open from three point range. Solent did not shoot that well or the margin would have been greater.

Even though they have been the best team for two years they strengthened in the summer by signing England international Orlan Jackman and he led them with 31 points backed up with scoring across the roster. Mike Williams led Storm with 16 points and Greg Poleon with 15. The big positive for Storm was the performance of Abdul who hit 13 points at a point per minute played.

On Sunday it was a very comfortable victory against a team destined for the bottom of the table place. Nottingham contested the first period but then the game slipped further and further away from them as Storm were scoring freely. Williams and Poleon scored 25 of the first quarter score of 27 and these two and Bode Adeluola scored 70 points between them. Storm won every quarter and led by as much as 41 points with only Powell offering any resistance for the Hoods as he made 24 points.

Greg Poleon led Storm with 28 points and 12 rebounds, Mike Williams had 22 points and 7 rebounds and Bode Adeluola had 20 points. Abdul again contributed with 12 points and 6 rebounds.

Next weekend sees Storm with a rare weekend off, but they return to Hertfordshire Sports Village for a home game against Reading Rockets on Saturday 27th March.