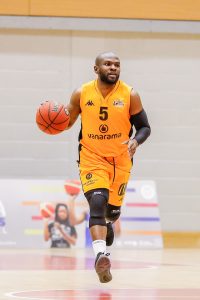 A superb offensive performance swept Vanarama-sponsored Hemel Storm to a 30 point victory in their National League Division One clash with Worthing Thunder on Saturday.

COVID restrictions meant all players were tested before competing and the game played behind closed doors at the Hertfordshire Sports Village. Which was a shame as the fans would have loved watching Hemel hit an amazing 62 points in the first half with Bode Adeluola proving unguardable and Greg Poleon not missing a single shot on his way to 23 first half points.

The only downside was that defensively Storm conceded 52 but the second half was probably as good a performance as Storm have played hitting 57 points and limiting Worthing to just 37. Storm outplayed Worthing in all aspects of the game and ran their fast break to perfection, looking up the floor and pushing the ball for easy score after score. Storm led for 38 minutes of the game, such was their dominance over a rival that has proved a tough challenge over the years.

Storm hit 32 fast break points to 13 by Worthing and out-scored the visitors 78-44 in the paint. Worthing were reduced to throwing up three-point shots but only made 6 of 28 attempts.

Storms offence was ruthlessly efficient shooting 73% from two-point range and 62% overall and held Worthing to 44%. They recorded an amazing 27 assists such was the team focussed approach. The final score was Storm 119 Worthing 89. 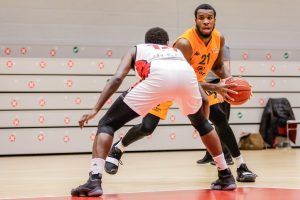 Greg Poleon led all scorers with 33 points shooting an incredible 88%, Bode Adeluola made 30 also at an impressive 77%, and Mike Williams hit 20.

On Sunday the team travelled to Southampton to take on last season’s league champions Solent Kestrels in the quarter finals of the L Lynch Trophy. Solent are undefeated this season, so a hard contest was in store, but the team stepped up to the fierce competition. Having lost the second quarter by 8 they fought back and took the third quarter by 3 to go into the last ten minutes trailing by 6 and with a real chance of making a challenge. Sadly fatigue hit and the team lost the final quarter  by 14 and 20 points overall at 88-68.

Mike Williams top scored with 18, Greg Poleon hit 15 and Levi Noel and Tayo Oyefusi made 12 each.