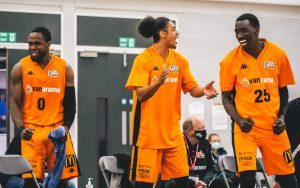 Hemel Storm took on Reading Rockets in the new pre-season competition, The L Lynch Trophy which began on Saturday.

Due to current restrictions the game was played behind “closed doors”. However, it was livestreamed and has currently had over 3,000 views.

The game was a welcome moment after an eight month absence of top-level basketball. It followed a huge amount of work by a national forum of all clubs working together to make it happen.

As expected, the teams were a little rusty in the first quarter. Hemel trailed 14-8 before they started to find their range and ended up 21-20 at the quarter end thanks to a huge buzzer beating 3 pointer by returning American favourite Mike Williams. This is a new look Hemel with Levi Noel also returning to the fold and Tayo Oyelusi, a former league winner, joining the roster. 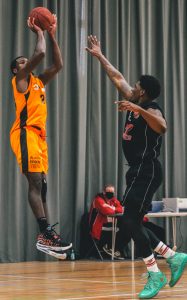 Hemel had their best scoring run at the start of the second quarter, with a 9-0 spurt taking them to 28-20 including some fantastic dunks by fellow American Greg Poleon which would have the Storm faithful leaping in their lounges. It was a position Storm would not relinquish as the gears clicked and the team started to flow.

Stand out performer for Hemel was Greg Poleon who hit a double double with 21 points and a huge 18 rebounds. Fellow American Mike Williams had 19 points Jack Burnell 14 including an impressive 67% from 3 point range and Bode Adeluola hit 13 with 9 assists.

The trophy competition continues this weekend when Storm take on Oaklands Wolves on Saturday 17th October, 17.45pm tip off. The game will again be livestreamed for free on the Basketball England YouTube page.

Once these group games are completed two teams from each group will progress into the quarter finals to be played during the coming 2020/21 season.

The start date of this NBL1 season cannot yet be confirmed as we wait the outcome of discussions between Basketball England and the Government to help cover the lost income from gate receipts.

Photos from Saturdays game, taken by Lizzy Harrison can be viewed on our website