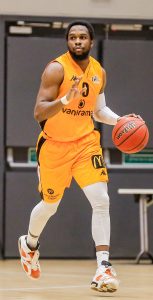 Vanarama-sponsored Hemel Storm improved their record to 4 wins and 1 loss with a comfortable 109-94 victory over Leicester Warriors in Leicester on Saturday.

Greg Poleon continued his fine form with 8 first quarter points as Storm found a nice balance of inside moves, outside shooting and penetrating drives and set an early lead at 31-20 after the first ten minutes. Former Storm guard Leon Henry led the reply for the home side draining multiple triples as the Storm defence failed to guard the perimeter, but Mike Williams class shone through as he hit multiple shots and used top class footwork to attack the hoop.

Storm led 58-44 at the half and Coach Spinks chose to play the majority of the second half with his bench players. Jack Burnell stepped up hitting 4 three pointers to extend the lead to 80-61 at the end of the 3rd.

With the starters resting Leicester took the last period 33-29 where defence was forgotten and the game became a shootout, but the work had been done and Storm are in a good position to move into the top four of the Division One table.

Mike Williams led all scorers with 35 points, hitting an amazing 61% of his shots from downtown.

Leon Henry made 25 for Leicester and Martin Gayle 19.

Storm out rebounded Leicester 52-35 and led for the whole game. Tougher tests to come but job well done.