Tayo’s triple brings down the Rockets 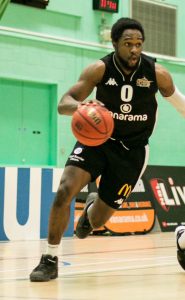 Despite trailing for most of the game Vanarama-sponsored Hemel Storm took a well-deserved 82-80 victory from Saturday’s game against Reading Rockets and tightened their grip on third place in NBL Division One.

Playing without their talisman Greg Poleon, out with an injured back, Storm had to find a new way of playing and to make up for the 24 points and 12 rebounds that were missing from the line-up.

Things did not start well as throughout the first half Storm regularly turned the ball over, gave second shots away and were generally out hustled by Reading, being second to every loose ball. They went in at the end of the first quarter down 20-26, the margin three points smaller due to a last second long range three-point score from Bode Adeluola and at the end of the half down 36-42, thanks to a tough three-point shot made by Mike Williams.

It really did need players to step up and they did so in some style in the second half. Reading had been beaten twice by Storm this season and were not intending to make it three defeats. Every scoring run that Storm had was responded to by Rockets and getting the lead below 6 was proving a real challenge but similarly every Reading run was responded to by Storm and as the lead stretched to 12 Storm would respond to pull it back, and the momentum moved in Storm’s favour at the end of the third period as they pulled back to 61-62, having taken their first lead of the game at 61-58, setting up a tremendous final quarter.

Storm were taking much better care of the ball now and Hafeez Abdul was proving a real force on the offensive boards. The Storm defence had improved significantly and held Reading to several shot clock violations whilst offensively they were playing team ball, moving the ball and players were cutting and screening to get each other free. Mike Williams was particularly impressive, making smart cuts to get good two points scores rather than settling for long threes. 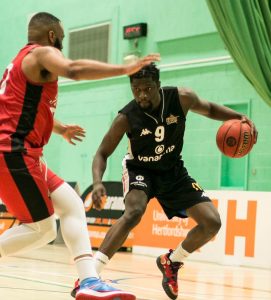 A three pointer by Bains and two scores from former Storm big man Francis stretched Reading’s lead by 7 at the start of the final period. Tayo Oyefusi scored and drew a foul, made the free shot and an Abdul three-pointer pulled the score back. Dixon of Reading and Storm’s Mike Williams traded three-pointers as the teams were tied at 77 with one minute left.

Reading’s American guard O’Showen Williams had played the whole game and had scored inside and out, proving a difficult player to guard, he hit two points and with only seconds left on the shot clock, Tayo Oyefusi hit a fantastic three in reply. Reading’s Williams was fouled and went to the line with 12 seconds on the clock and needed to make both foul shots to tie the game. Despite the great game he had played he missed the first foul shot giving Hemel a one-point lead with 12 seconds to play.

A timeout from Coach Spinks enabled Hemel to advance the ball into the offensive half and immediately on the inbound pass Reading fouled to stop the clock and send Storm’s Mike Williams to the line. With the chance to make it a three-point lead Mike also missed the first free throw, leaving Storm up by 2 with 11 seconds to play.

A Reading timeout allowed them to advance the ball and run a final play, with all eyes on O’Showen Williams who had proved so hard to handle. The inbound pass was made, and the ball circulated with Storm denying William’s possession. With the clock down to 3 seconds the ball fell to Pinnock who took a final three-pointer to win the game - which hit the rim and bounced out. Bode Adeluola grabbed the rebound, the buzzer went, and Storm recorded a great victory.

A real team performance from Storm with contributions from all players. Mike Williams led all scorers with 23 points on 60% shooting. Hafeez Abdul stepped up and impressively filled the gap left by Greg Poleon’s absence, recording a double double with 20 points and 13 rebounds, 7 of which were on the offensive glass. Tayo Oyefusi hit 13 and 5 boards, Bode Adeluola 12 and 6 assists. Levi Noel had 8 and 5 assists and Jack Burnell 6 and both played some excellent defence.

Williams hit 22 for Reading, Francis and Toluwase had 16 each.

Storm have no games over the Easter weekend but return with a double away weekend when they visit BA London Lions on the 10th April and Essex Rebels on the 11th April.