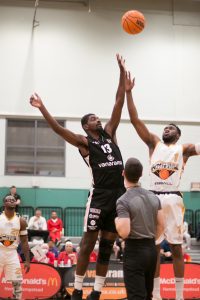 Last seasons 3rd and 2nd placed teams faced off as Vanarama-sponsored Hemel Storm met Thames Valley Cavaliers in the opening home match of the new NBL Division One season at Hemel Hempstead Leisure Centre on Saturday night. The teams had met previously in the L Lynch Trophy which gave Cavs a narrow win.

Storm entered the game shorthanded as star American Greg Poleon sat out his third straight game with a knee injury, and guard Bode Adeluola was also out injured.

Storm broke out to a fast start hitting a 9-2 lead with fluent offence and aggressive defence, Tayo Oyefusi finding his range from distance. Thames Valley, led by the excellent Sylla, were very active around the basket and kept the scoreboard moving. A three point play by Taylor Johnson gave Storm a 25-18 lead, before a last second drive from Freckleton left the score at 27-24 at the end of a high scoring first quarter.

The second period was a much more attrition affair as the offences dried up and fouls started to dominate. A time out at 5.50 tried to reset the teams but mistakes still shone with backcourt violations and 24 second violations prevalent. Two 3s from Jack Burnell and Taylor Johnson pushed the score on as Hemel continued to deny the Cavaliers shots from range, before a crazy last 15 seconds saw the Cavs score 5 quick points and end the half 49-45 in favour of Storm.

Thames Valley’s aggressive defence put them in the penalty with 6 minutes left of the third quarter but somehow they didn’t foul again and Hemel didn’t get the bonus. Freckleton started to find his range and hit back to back threes as Cavs tied the score. American Bonner penetrated to the hoop regularly as the scoring came from two players for the Cavs. A fast break sent Johnson to the line and he hit both, but Freckleton hit a fade away three as the buzzer sounded to end the quarter tied at 66. Thames Valley took an early lead in the final quarter and Storm looked under pressure but three great plays from Johnson turned defence into offence and took Storm to an 8 point lead with 7 minutes remaining. Two Storm turnovers reduced the gap to 3. Both teams turned the ball over as nerves set in but two big scores for Storm from Lashley, who also took a charge, kept the lead at 6 with 3.38 left on the clock. Bonner hit back for Cavs after a block on Newman by Sylla and the score was 85-81 with 2.35 left as Dru Spinks called a Storm timeout. An offensive foul on Lashley gave possession to Cavs as they made it a two point game. With everything on the line Storm fought for every ball and challenged every possession. Both teams competed with everything they had as they strove for the win. Taylor Johnson drew a foul with 34 seconds left and made both shots to give a six point lead. Bonner was fouled but missed both shots as the crowd went wild. Cavs fouled again to stop the clock and Levi Noel went to the line and made both shots and Storm grabbed a great and well deserved win 91-85.

Top scorers for Storm were Johnson with 28, Lashley 25, Oyefusi 14 and Lewis 13.
For Thames Valley Cavaliers Bonner had 31 and Freckleton 28.

Storm’s next game is on Saturday 16th October against Team Newcastle University at Hemel Hempstead Leisure Centre, Tip Off 7pm. Tickets are available online at www.stormbasketball.net or can be purchased at the door on the night.