Hemel Storm sponsorship with Arriva resumes for the 2021/2022 season

Hemel Storm are delighted to announce that our sponsorship arrangement with Arriva will continue for the current season.

This agreement extends a transport and kit sponsorship partnership that began in 2016. Since this time Storm players and fans have enjoyed the provision and luxury of the Arriva fleet of “Green Line” coaches as we have travelled to all parts of the country competing in the National Basketball League and associated cup competitions.

In an invaluable level of support from one of our biggest local organisations, Storm Chairman Tony Humphrey commented “Our thanks to the Arriva team at Hemel and Luton for agreeing to provide our transport needs, it’s a partnership we love and it makes a huge impact to our determination to be a leading force in national basketball and a source of sporting entertainment for our local community”

Storm fans will of course be aware of the huge transport role that Arriva delivers on local bus routes as well as routes beyond Hemel, including the link between Luton airport and the capital.  The General Manager at Arriva in Hemel Hempstead is Scott O’ Neill and he says “The Arriva teams in Hemel and Luton are thrilled to once again to be working with Storm, it’s a partnership we value and enjoy and its motivating to support Storm’s growing following and their basketball influence across our town and local area” 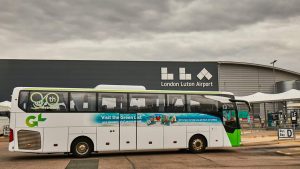