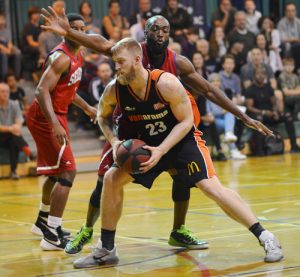 New-look Hemel Storm rounded off their preseason with an impressive three point victory on Saturday night in a challenge match against Team USA-Select.

In front of a packed crowd at Sportspace and following a hectic summer of rebuilding, Vanarama-sponsored Storm showcased six new players and were led by recently appointed Head Coach Robert Youngblood.

The visitors are part of a three-team touring squad made up of aspiring and talented American players many of whom will play professionally in Europe.  Storm faced the group’s top side and after a thrilling and entertaining clash the result was decided in the last minute on a put-back basket by Hemel’s Wayne Yeboah and free-throws from new signing David Ajumobi.

Coach Youngblood said: “It was a pleasing win given the talent level and size of our opponents, but it’s just the start. We can build on this. Right now our guys have to stay focused and continue to get ready for the season ahead. It’ll take us time to gel as a unit but we’ve made good progress in a short time.”

The Club is expecting to finalise its roster this week ahead of their first competitive game next Saturday away to Leicester Warriors in a National Trophy pool game.

On Saturday, there was a fitting return for former Storm star Bode Adeluola who was back in the side after a year recovering from knee surgery. The dynamic point guard drew a foul driving to basket and calmly sank the two free throws to record Hemel’s first points of the new season.

Tenacious defence and accurate shooting especially from captain Michael Darlow  and new signing David Ajumobi edged Hemel ahead. A balanced starting five of Adeluola, Wayne Yeboah, Darlow, Ajumobi and seven-footer Lee Greenan posed threats from inside and outside of the key and some excellent movement and finishing gave Hemel a 25 – 18 first quarter edge.

The visitors’ full court pressure helped them to tie the score at 33 each half way through the second stanza but a Coach Youngblood timeout settled the team and after Ajumobi powered his way to the basket in the final seconds of the half Storm went into the break ahead 50 – 41.

Both sides used an aggressive man to man defence in the third quarter and USA Select crashed Hemel’s boards to come up with some outstanding offensive rebounds and second effort scores.

The visitors had closed the gap to 72 – 71 with one second remaining in the period when 21 year-old Jack Burnell sank a trademark long-range three pointer to put his team up 75 – 71 as the crowd erupted.

In a carbon copy fourth period threes from Burnell and Darlow kept the home team’s noses in front and despite intense pressure from the visitors Storm was able to seal a memorable victory.