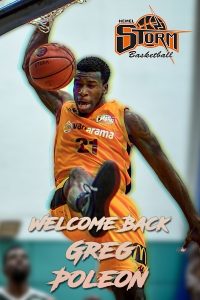 Poleon, who averaged 19.1 points and 11 rebounds, proved to be one of the leading players in Division One. This past year, Greg consistently posted double-doubles, produced numerous highlight plays and proved to be a fan favourite on and off the court. The 6ft 6 forward finished 2nd in the league in average rebounds and 7th in efficiency, whilst shooting an impressive 53.7% from the field.

Greg will join us in the UK as soon as visa conditions allow.