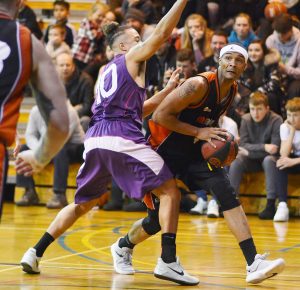 Hemel Storm are through to the National Cup Final after beating Division One rivals Loughborough Riders 103 – 86 in front of a raucous capacity crowd at Sportspace on Saturday. .

Hemel lost twice to Riders this season in League and Trophy games but it was third time lucky as, roared on by their fans, Hemel produced an outstanding display of free-flowing basketball and accurate shooting to secure their first national final since winning promotion to the top flight in 2012.

Storm will face Manchester Magic in the Final on Sunday January 21st. at the University of East London, tip-off 3.30pm.

A blistering first half saw the Vanarama-sponsored Storm slice through the visitors pressing defence with ease and pour in a season’s high half time tally of 59 points to Riders’ 46. The visitors’ press had caused Hemel problems previously but not this time.

Hemel Coach Robert Youngblood had sometimes seen his side earlier in the season play poorly after half-time breaks so he sent his players out on court early for the third quarter to ensure they had extra time for warm-ups. And they responded with a dominant period that denied Riders any thoughts of getting back on terms.

After early exchanges fan favourite and three-point specialist Jack Burnell was substituted into the game and brought the crowd to its feet in a frenzy when he sank back-to-back triples that put Hemel 74 – 55 ahead and sensing they were within touching distance of the Cup Final.

Storm were superbly led by their captain and mercurial point guard Bode Adeluola whose creative and unselfish play resulted in an impressive 12 assists which is one of the highest tallies ever recorded by a Storm player. Despite the visitors attempts to pressure him into mistakes the athletic Adeluola was secure with the ball and able to set his teammates up for some undefended shot attempts.

Although Storm went into the fourth period with determination to finish the job, Riders rallied briefly and closed the gap to 72 – 84 but a Storm time-out stopped the rot and a sequence of superb individual plays by Hemel’s utility forward Wayne Yeboah saw him steal the ball twice, nail four consecutive free-throws and score a driving lay-up under pressure from two Loughborough defenders.. A Roberts jump-shot with four minutes remaining restored Hemel’s lead to 93 – 72.

Fittingly it was Yeboah, known at the Club for his willingness to always give one hundred percent effort no matter what the circumstances and to do the little things that help his team win, who broke free and scored the jump-shot that brought the hundred points up as the crowd began to celebrate with a minute left to play.

Riders Head Coach Mark Jarram was gracious in defeat: “I thought Storm were fantastic tonight and really deserved the win. They shot the ball extremely well, were well coached and the atmosphere here and the Hemel support played a part in the result. I wish them the very best of luck in the Final against Manchester.”

After losing twice to Riders this season Storm Head Coach Youngblood who famously said that “we’ll be ready for Riders in the Cup” explained his team’s turnaround: “We had more time to prepare for them and we just never let up. We knew how to win but just had to execute our plan. To have 59 points by half-time shows how effective our attack, attack, attack mentality was. The guys were fantastic and they deserve to be competing for a national title.

And he was quick to point out that although Hemel beat Manchester 77 – 55 back in November in a League game “that result means nothing when it comes to a Cup Final”.

Storm took on League leaders Solent Kestrels on Sunday in a Division One clash in Southampton and after the heroics of the night before and without their injured centre Lee Greenan just came up short in controversial circumstances. 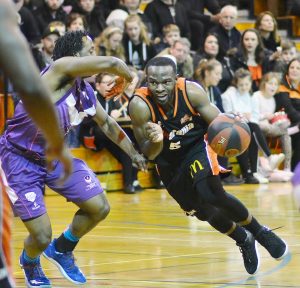 Although not playing at the level of the previous night Hemel did fight back from a nine point half-time deficit to win periods three and four and they lead by a single point with one second remaining in the game when the home team’s American guard Herman Senor missed a shot from close range. But referee Nadine Dudley judged that he was fouled and awarded two free-throws. Senor scored both shots from the line to win the game for the home side.

Storm are at Sportspace again this Saturday (13th) in National League Division One action against Reading Rockets, tip-off 7pm. Tickets are available from the 'tickets & shop' drop-down menu above.